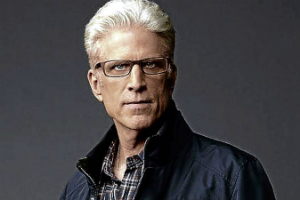 American actor, a top favorite as the libidinous bartender Sam Malone in the award-winning TV series "Cheers," a role he played with wit, male chauvinism and pathos. The show made its debut 9/30/1982 with a final episode 5/20/1993.

The son of an archaeologist museum director, he had a pleasant childhood and an education at Stanford. Danson began his career in New York theater, soap operas and commercials, with credits in nine movies by 1990.

Lanky, 6'2", with brown hair and blue eyes, Danson loves his work and is a one-line punster, though he is self-critical. He also works on ecology projects. He made a first marriage for seven years before his marriage to Casey, an interior designer on 7/30/1977.

When Casey gave birth to their daughter, Kate, 1979, she had a massive stroke left her paralyzed on the left side. It took three years physical therapy to recover. They also have an adopted daughter, Alexis. He and Casey separated in March 1992.

Danson had a romance with Whoopi Goldberg for 18 months, starting in May 1992. He and Mary Steenburgen first met in 1983 when they were both married to others. They began a relationship in August 1994 and married in Martha's Vineyard, MA on 10/07/95.

He and Steenburgen co-starred in the film "Gulliver's Travels," and in a TV sitcom. His new show Becker premiered 11/02/1998 in which he portrays a Bronx doctor. Danson also appeared several months ago in the Showtime drama Thanks of a Grateful Nation.