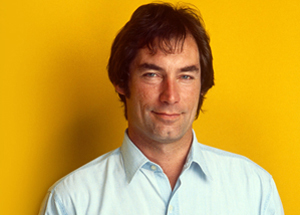 Timothy Peter Dalton (born March 21, 1946) is an English actor of stage and screen, best known for portraying James Bond in The Living Daylights (1987) and Licence to Kill (1989) and in his roles in Shakespearean related films and plays.

Welshman Dalton was born in Colwyn Bay, Wales, to an English father and an American mother, of mixed English and Italian-Irish ancestry. Before he was born, his family moved to Wales; where his father was stationed during World War II. Some time in the late 1940s, as he was reaching four years old, the family moved to Belper, Derbyshire in England. He became interested in acting in his teenage years, and left school in 1964 to enroll in the Royal Academy of Dramatic Art and tour with the National Youth Theatre in the summer. Dalton did not complete his RADA studies, leaving the academy in 1966 to join the ensemble of the Birmingham Repertory Theatre. He quickly moved to television, working mainly with BBC and, in 1968, made his film debut in The Lion in Winter, the first of several period dramas, which included a remake of Wuthering Heights in 1970 in which he portrayed the tortured Heathcliff. In 1968 (aged only 22) Albert Broccoli asked Dalton to take over for Sean Connery in the role of James Bond.

After a few more films, Dalton took a break in 1971 to concentrate on the theatre, performing with the Royal Shakespeare Company and other troupes throughout the world. With the exception of the 1975 film Permission to Kill, he remained a theatre actor until 1978. That year he starred in Sextette as the husband of 85-year-old Mae West, hailing his return to cinema and the beginning of his American career. While in the United States, Dalton worked mainly in television, although he starred in several films (including the cult classic Flash Gordon, in which he played the role of Prince Barin) and gave notable performances for the BBC, particularly as Mr. Rochester in the 1983 miniseries adaptation of Jane Eyre.

In 1986, after Roger Moore's retirement from the role of James Bond, the lean, 6'2" green-eyed Dalton was the first choice to replace Roger Moore, and become the first Welsh James Bond, but obligations to the film Brenda Starr and the stage productions of Antony & Cleopatra and The Taming of The Shrew kept him from accepting the role. Sam Neill was then screen-tested for the part of Bond, but was ultimately rejected by Albert Broccoli. Pierce Brosnan was then approached for the role, but was forced by NBC to turn it down (after initially accepting it) because of his commitment to the television revival of Remington Steele. Meanwhile, Dalton had completed the filming of Brenda Starr and was now able to accept the role of James Bond.

Previously, Dalton had been considered as a replacement for Sean Connery when Connery left the role and offered the role of James Bond four times. In 1968, he was asked to play Bond in On Her Majesty's Secret Service (1969), Sean Connery having decided that You Only Live Twice (1967) would be his last Bond film. Dalton turned the offer down, feeling he was too young for the role, and because of what he felt was an imposing legacy left behind by Connery; the role finally went to George Lazenby. During the late-1970s, he was approached again, but he did not favour the direction the movies were taking. As he explained, his idea of Bond was different. Dalton was also asked to star in For Your Eyes Only (1981), and the producers also considered him for the role in Octopussy (1983), but they finally re-contracted Roger Moore (see Octopussy), although Ian Ogilvy was also a serious contender for the role at the time.

Dalton's first outing as 007, The Living Daylights (1987) was successful, and grossed more than the previous two Bond films with Roger Moore, as well as contemporary box-office rivals such as Die Hard and Lethal Weapon. However, his second film, Licence to Kill (1989), did not perform as well at the US box office, in large part due to a lacklustre marketing campaign, after the title of the film was abruptly changed from 'Licence Revoked'.

Since Dalton was contracted to do three Bond movies, the pre-production of his third film began in 1990, in order to be released in 1991. It was rumored that he would make The Property of a Lady (which is one of Ian Fleming's short stories), but this was never confirmed. What was confirmed is that the story would deal with the destruction of a chemical weapons laboratory in Scotland, and the events would take place in London, Tokyo and Hong Kong. However, the film was cancelled due to legal issues between UA/MGM and EON that ran for around 4 years.

In 1993, the legal battle was over, and Dalton was expected to return as James Bond (although his contract had expired, negotiations with him to renew it were being held) in the next Bond movie, which later became Goldeneye. In an interview with the Daily Mail in August of that year, Dalton indicated that Michael France was writing the screenplay for the new movie, and the production was to begin in January or February 1994. When the deadline was not met, Dalton surprised everyone on the 12th of April 1994 (during the time he was shooting the mini-series Scarlett) with the announcement that he would not return as James Bond. Two months later, it was announced that Pierce Brosnan would be the new Bond.

Dalton's assertion that Michael France was writing the new film proved correct. Working closely with the Broccolis and Wilson, France had created a first draft screenplay named after Ian Fleming's house in Jamaica, GoldenEye. The first draft had been written with Dalton in mind and, when Brosnan came on board, it was rewritten by British writer Jeffrey Caine, who retained a lot of France's original ideas involving Bond's relationship with the traitorous 006, Alec Trevelyan, but added new angles to the piece. It was Caine who added the prologue that opens the finished film. A third writer, Kevin Wade, was brought in to polish the script, and there was final tinkering by Bruce Feirstein, a friend of Barbara Broccoli and her husband Fred Zollo (see GoldenEye for full details). Dalton reflects (in 2007) on the (retrospective) possibility of appearing as James Bond for a third time: "I was supposed to make one more but it was cancelled because MGM and the film's producers got into a lawsuit which lasted for five years. After that, I didn’t want to do it anymore."

Unlike Moore, who had played Bond as more of a lighthearted playboy and admitted that he had read very little Fleming and found the books lacking in humour, Dalton's portrayal of Bond was darker and more grittily realistic. A fan of the literary character, often seen re-reading and referencing the novels on set, Dalton determined to approach the role and play truer to the original character as described by Fleming. So, his 007 came across as a reluctant agent who did not always enjoy the assignments he was given, something only seen on screen before, albeit obliquely, in George Lazenby's OHMSS. In The Living Daylights, for example, Bond tells a critical colleague: "Stuff my orders! Tell M what you want. If he fires me, I'll thank him for it." And in Licence to Kill, he resigns the secret service in order to pursue his own agenda of revenge.

This approach proved to be a double-edged sword. Film critics and fans of Fleming's original novels welcomed a more serious interpretation after more than a decade of Moore's approach. However, the reaction of Moore aficionados and those who had been introduced to Bond during Moore's 12-year tenure (as well as Sean Connery before) was mixed, as most of them were generally unfamiliar with Fleming's novels, while Desmond Llewelyn, who played gadget master Q, stated that he favored Dalton's performance as being truer to Fleming's stories. Dalton's serious interpretation was not only in portraying the character, but also in performing most of the stunts of the action scenes himself, with the assistance of stunt coordinator Jonas Carp. This is noticeable, for example, in Licence to Kill (Ultimate Edition with the film restored to director John Glen's uncut version), where it is clearly Dalton who sets fire to the villain and flees the ensuing explosion at the climax.

It may be observed that this return to Fleming's grittiness is a direction attempted by EON Productions periodically for its James Bond film series, for example with For Your Eyes Only, rather than just during Dalton's era as Bond and now with Craig in the role.

The Post-Bond era
After his Bond films, Dalton divided his work between stage, television and films, and diversified the characters he played. This helped him eliminate the 007 typecasting that followed him during the previous period. He played the villainous matinee idol Neville Sinclair in 1991's The Rocketeer, and Rhett Butler in Scarlett, the television mini-series sequel to Gone with the Wind. He also appeared as criminal informant Eddie Myers in the acclaimed 1992 British miniseries Framed.

During the second half of the 1990s he starred in several cable movies, most notably the Irish Republican Army drama The Informant and the action thriller Made Men. He also played Julius Caesar in the 1999 TV movie Cleopatra.

In 2003, he played a parody of James Bond named Damian Drake in the film Looney Tunes: Back in Action. At the end of that year and the beginning of 2004, he returned to theatre to play Lord Asriel in the stage version of His Dark Materials (the same character is played in the 2007 movie version by one of Dalton's successors in the James Bond role, Daniel Craig). In 2007, Dalton played Simon Skinner in the highly acclaimed action/comedy movie Hot Fuzz, his most prominent appearance in mainstream cinema in several years.

Dalton, who is unmarried, lives in Los Angeles. He has one son, Alexander (b. 1997), with Oksana Grigorieva.