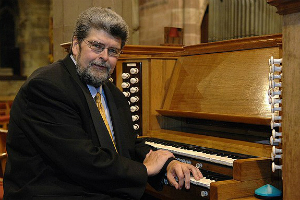 Carlo Curley (August 24, 1952 – August 11, 2012) was an American classical concert organist. Dubbed "the Pavarotti of the Organ" by a newspaper in America, he was one of only a few concert organists worldwide who support themselves exclusively by giving recitals, concerts and master classes, without any supplement from teaching or church position. Curley was cosmopolitan, and referred to three places as ‘home’: England, Scandinavia and North Carolina (USA).

Curley was born into a musical family in North Carolina, USA, and attended the North Carolina School of the Arts. He subsequently enjoyed advanced tuition with Virgil Fox, Robert Elmore, George Thalben-Ball and coached privately with Arthur Poister. He also was influenced greatly by long-time friend and confidant, Robert Noehren, for whom he often played. Noehren was full of praise for Curley’s talent and once wrote to a colleague in the early 1980s that “Curley could easily become the new Anton Heiller”. Curley’s basic approach to performing, while very much his own, pays homage primarily to that of Virgil Fox, aiming to make classical organ music popular to a wider audience, often including pieces from other classical genres arranged and transcribed by himself.

Curley was the first classical organist to perform a solo organ recital at the White House, and also played before several European heads of state. He toured extensively throughout the world, and had a large and loyal following. The Carlo Curley Concert Circle, based in the UK, was formed in 1990 by Cherry Stevens and organized numerous trips with him throughout England and abroad.

Curley used a substantial Allen touring organ where the venue lacked an instrument of sufficient scope to support his repertoire. He recorded much of the classical organ repertoire for such international firms as RCA ‘Red-Seal’, ProArte, Rediffusion and Decca International.

Curley acquired considerable renown in Japan, where he was one of the few organists to achieve regular radio airtime. His CD recordings are commonly held in public libraries.

For many years, he was known for writing an entertaining blog-type essay for fans. This ceased in 2010.

Curley latterly expanded his performances to include Rodgers, Makin and Copeman Hart organs. Fittingly perhaps his last major 'Battle of the Organs' was in June 2012 at Liverpool Anglican Cathedral with his good friend Ian Tracey, the mighty Willis and a Copeman Hart touring organ.

He served as patron for numerous music societies as well as for the newly formed British Academy of Music. He performed for the fourth time on April 26, 2008 on the Wanamaker Organ in the Grand Court of Macy’s Center City, Philadelphia, this instrument being the largest operational pipe-organ in the world. Curley was involved in organ design and construction and served as advisor to numerous clients, including Melbourne City Council (Australia), and The Cube, Shiroishi (Japan).

His autobiography In The Pipeline was published by HarperCollins in 1998.

His ashes are interred in the grounds of Pershore Abbey in the UK where his great friend The Revd Kenneth Crawford is the incumbent.