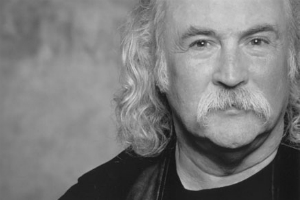 American musician who joined Roger McGuinn to form the nucleus of the "Jet Set," later called "The Beefeaters" and finally, "The Byrds," 1964. Four years later he moved on to team up with Stills and Nash to form their superstar group.

With decades of drugs including heroin and coke, he was in and out of jail on drug charges 1983-1986. By 11/02/1994, his liver could not process any more abuse and he went into the hospital to either get a new liver or die. A donor was found and the seven-hour operation successfully completed on 11/19/1994. He underwent surgery 10/21/1997 in L.A. for a torn muscle in his abdomen and gigs were cancelled in August 1998 while doctors watched closely a fever and infection.

Crosby was inducted into the Rock and Roll Hall of Fame for his work with the Byrds, and on 5/06/1997 for Crosby, Stills and Nash.

In 1997 Crosby had been reunited with a son who was once given up for adoption. James Raymond, 34, is a musician following in the footsteps of his dad. They have formed a group named CPR and do a complex three-part harmony of guitar and piano. Meanwhile Crosby is learning to fly and working on a book "Stand and Be Counted" that is to be released in 1998.

Nash has reunited with Crosby and Stills to release a new album "Looking Forward" 10/26/1999, to be followed by a U.S. tour; their first since 1974. Nash has said that they're "a little more mature, compassionate and sensitive of each other's feelings," Stills says that he is finally playing the guitar the way he had been striving to for 15 years and Crosby says that he will be "awake" for this tour, alluding to his former drug habit.

In March 2000 it was revealed that Crosby had fathered the two kids of lesbian couple Julie Cypher and singer Melissa Etheridge.

On March 6, 2004, the rock musician was arrested in a Manhattan hotel and charged with criminal possession of a weapon in the third degree, a felony, as well as other lesser offenses. Evidently, a maid found marijuana, a loaded gun and several knives in his room.