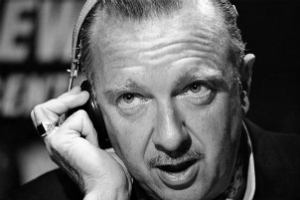 American broadcaster, one of the most respected and reliable newscaster of the era who preceded over CBS coverage of the Presidential nominating conventions from 1952. He was CBS evening news anchor for more than 20 years, a beloved and trusted fixture in American living rooms through the '60s and '70s.

Born and raised in the heartland, he had a cheery optimism that mirrored the everyday man, "work hard, play fair, believe in God and country and all will be right with the world." His resonant voice, deep and rich, rumbled forth with a sense of momentousness.

In 1981 he signed off as the CBS Evening News anchor when Dan Rather took over, and left the board of CBS a decade later after an acrimonious dispute. He remained active on the lecture circuit, often in connection with special interests in ecology and wildlife.

Cronkite's autobiography was published in 1996 "A Reporter's Life." He had a knee replaced that year and in March 1997, he had quadruple bypass surgery. He and his wife Betsy had three adult kids, Nancy, Kathy and Walter III.