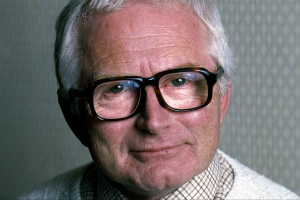 British script writer and creator of some of the funniest and most beloved British TV comedy series. He is the brains and wit behind such loveable sitcoms as "Are You Being Served" and "Dad's Army."

Croft grew up in a show business family; his mother was the actress Annie Croft and his father, Reginald Croft, was a radio actor. Young David made his debut on stage, but at the outbreak of World War II, he joined the Army where he served for five years in the Pacific and Africa.

In 1945, upon his return home, he landed singing and acting gigs, occasionally producing a TV show. In 1964, his wife introduced him to Jimmy Perry, and the relationship would prove significant to Croft's career. They hit it off and began writing together with their first collaboration resulting in "Dad's Army," first airing in 1968. During the filming of the series, Croft met Jeremy Lloyd with whom he wrote "Are You Being Served?" (1972) and its successor, "Grace and Favour" (1992). The series entitled "'Allo 'Allo" that began airing in 1982 clinched Croft's reputation as the "king of comedy." The long-running "Are You Being Served" as entertained both British and American audiences.

In addition to writing, Croft produced and directed many episodes of his shows.

In 1978 he was awarded the OBE for services to television.

Married for over 50 years, he works busily into his 82nd year. His last sitcom "Oh Doctor Beeching" was aired in 1998 and he published his autobiography in 2004.