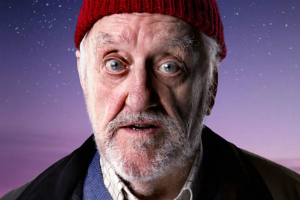 Bernard Cribbins, OBE (born 29 December 1928) is an English character actor, voice-over artist and musical comedian with a career spanning over half a century. He came to prominence in films of the 1960s, and has been in work consistently since his professional debut in the mid-1950s.

Cribbins is particularly well known to British audiences as the narrator in The Wombles, a BBC children's television programme that ran for 40 episodes between 1973 and 1975. He also recorded several successful novelty records in the early 1960s and was a regular and prolific performer on the BBC's Jackanory from 1966 to 1991. Cribbins is well known for his role as Wilfred Mott, a companion of the Tenth Doctor in Doctor Who.

Born in Derker, Oldham, Lancashire, Cribbins served an apprenticeship at the Oldham Repertory Theatre, taking a break during his years of study to undertake national service with the Parachute Regiment in his late teens.

Cribbins made his first West End theatre appearance in 1956 at the Arts Theatre, playing the two Dromios in A Comedy of Errors, and co-starred in the first West End productions of Not Now Darling, There Goes the Bride and Run for Your Wife. He also starred in the revue And Another Thing, and recorded a single of a song from the show titled "Folksong".

In 1962 he recorded two comic songs, "The Hole in the Ground" (in which an annoyed workman eventually buries a harasser) and "Right Said Fred" (in which three workmen struggle to move a heavy grand piano or similar). Both were produced by George Martin for Parlophone, with music by Ted Dicks and lyrics by Myles Rudge. "Hole in the Ground" reached the top ten in the UK Singles Chart (all chart positions are given below).

Cribbins was the narrator of the British animated children's TV series The Wombles from 1973 to 1975 and also narrated a BBC radio adaptation of The Wind in the Willows. He was the celebrity storyteller in more episodes of Jackanory than any other personality, with a total of 114 appearances between 1966 and 1991. He also narrated the audio tape of the Antonia Barber book The Mousehole Cat.

Other TV appearances include The Avengers (1968), Fawlty Towers (1975, as the spoon salesman Mr Hutchinson who is mistaken by the character Basil Fawlty for a hotel inspector), Worzel Gummidge (1980), Shillingbury Tales (1980) and its spin-off Cuffy (1983). Besides voicing The Wombles, Bernard Cribbins was a well-known regular on BBC children's television in the 1970s as host of performance panel game Star Turn and Star Turn Challenge. These programmes concluded with Cribbins narrating a detective story as recurring character "Ivor Notion", with a script usually by Johnny Ball.

In 2013, Cribbins starred as Jack in the series Old Jack's Boat, set in Staithes, and broadcast on the CBeebies channel at the start of the year. This featured Helen Lederer, Janine Duvitski and former Doctor Who companion Freema Agyeman in supporting roles. Although Freema Agyeman and Bernard Cribbins both played companions and supporting characters during David Tennant's tenure in Doctor Who (appearing in six episodes together), Old Jack's Boat marks the first time the two actors have appeared together on screen.

Cribbins' later theatre credits include the roles of Nathan Detroit in Guys and Dolls at the National Theatre, Moonface Martin in Anything Goes with Elaine Paige at the Prince Edward Theatre, Dolittle in My Fair Lady at the Houston Opera House, Texas, and Watty Watkins in George Gershwin's Lady, Be Good at the Regent's Park Open Air Theatre and on tour. He has also appeared in numerous pantomimes.

Cribbins returned to the world of Doctor Who in 2006 when a photograph of him at a wedding appeared on the BBC's tie-in website for the episode "Tooth and Claw". In January 2007 he had a guest role as glam rock promoter Arnold Korns in Horror of Glam Rock, a Doctor Who radio play for BBC Radio 7. That December he appeared as Wilfred Mott in the Christmas television special, "Voyage of the Damned"; he then appeared in a recurring capacity as the same character for the 2008 series, as the grandfather of companion Donna Noble. He became a Tenth Doctor companion himself in The End of Time, the two-part 2009–10 Christmas and New Year special. Cribbins's role as Mott makes him unique, as he is the only actor to have been featured alongside the Doctor's enemies, the Daleks, in both the TV and cinema versions of Doctor Who.

In 2009 Cribbins was honoured for his work in children's television with a Special Award at the British Academy Children's Awards which was presented by former co-star Catherine Tate, who portrayed his character's granddaughter in Doctor Who.

Cribbins was made an Officer of the Order of the British Empire (OBE) in the 2011 Birthday Honours for services to drama.