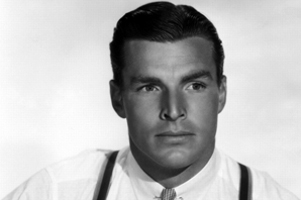 He won the 1932 Olympic gold medal for 400m freestyle swimming before subsequently breaking into acting. He starred in a number of popular films in the 1930s and 1940s.[1] He also played the title role in the serials Flash Gordon and Buck Rogers.

Competitor for the  United States

Raised in Hawaii, Crabbe graduated from the Punahou School in Honolulu. He competed in two Olympic Games as a swimmer. In 1928 he won the bronze medal for the 1,500 meters freestyle, and in 1932 he won the gold medal for the 400 meters freestyle.[2][3] He attended the University of Southern California, where he was the school's first All-American swimmer (1931) and a 1931 NCAA freestyle titlist. He also became a member of the Sigma Chi Fraternity before graduating from USC in 1931. In 1933 he married Adah Virginia Held, (December 16, 1912 - August 26, 2004) and gave himself one year to make it as an actor. If he didn't, he would start law school at USC. Crabbe and his wife were the parents of two daughters, Sande and Susan, and a son, Cullen. Sande died of an apparent anorexia in 1957, after a long fast when she was 20; at the time of her death, she weighed only 60 pounds.[4]

Crabbe starred at the Billy Rose's Aquacade at the New York World's Fair in its second year of 1940, replacing Johnny Weissmuller.

Crabbe's role in the 1933 Tarzan serial, Tarzan the Fearless, began a career in which he starred in more than one hundred movies. In the 1933 King of the Jungle, 1941 Jungle Man, and the 1952 serial King of the Congo, he played typical "jungle man" roles. He starred in several popular films at this time, including The Sweetheart of Sigma Chi alongside Betty Grable in 1933 and Search for Beauty (1934), and in 1936 was Flash Gordon in the very successful Flash Gordon serial, followed by two sequels, released by Universal in 1938 and 1940. The series was shown later extensively on American television in the 1950s and 60s, then edited for release on home video. He also portrayed Western folk hero, Billy the Kid, in 36 films, starred as Buck Rogers, and as a brother in his real-life fraternity in the musical The Sweetheart of Sigma Chi. In some movies he is credited as "Larry Crabbe" or "Larry (Buster) Crabbe". His sidekick in most of his westerns was actor Al St. John. In 1939 Crabbe reunited with Betty Grable for a lead role in the mainstream comedy hit Million Dollar Legs. Crabbe is the only actor to play Tarzan, Flash Gordon, and Buck Rogers — the top three syndicated comic strip heroes of the 1930s.

Crabbe starred in the television series, Captain Gallant of the Foreign Legion (1955 to 1957) as Captain Michael Gallant; the adventure series aired on NBC. His real-life son, Cullen Crabbe, appeared in this show as the character "Cuffy Sanders". He was featured frequently in archival footage in the children's television program, The Gabby Hayes Show. Prior to his playing "Captain Michael Gallant" Crabbe had hosted a local NYC based children's film wraparound television series The Buster Crabbe Show. The series, which was set against the backdrop of a ranch foreman's bunk house featured Crabbe engaging his viewers in games, stories, craftmaking, hobbies, informational segments, and interviews with guest performers and personalities in between reruns of old movie serials, westerns and comedies. The Buster Crabbe Show was seen weekday evenings on WOR-TV (Channel 9) in New York City from Monday March 12, 1951, to Friday October 3, 1952. The series returned to the NYC airways on WJZ-TV (Channel 7) (now WABC) on Monday September 21, 1953, and was retitled Buster's Buddies!. The WJZ TV version of the series included a studio audience of kids and became more of a kids' variety show. Despite the addition of the studio audience and Crabbe's personality, Buster's Buddies! was not a hit and it was canceled on Friday March 26, 1954. Crabbe made regular television appearances, including one on an episode of the 1979 series Buck Rogers in the 25th Century, in which he played a retired fighter pilot named "Brigadier Gordon" in honor of Flash Gordon. When Rogers (Gil Gerard) praises his flying, Gordon replies "I've been doing that sort of thing since before you were born." Rogers (who was born over 500 years earlier) responds "You think so?" to which Gordon replies "Young man, I know so!" Crabbe had, in fact, been playing "Buck Rogers" since long before Gerard was born.

Crabbe's Hollywood career waned somewhat in the 1950s and 1960s. The ever-industrious Crabbe became a stockbroker and businessman during this period.[citation needed] According to David Ragan's "Movie Stars of the '30s", Crabbe even owned a Southern California swimming pool building company in later years. In the mid-1950s, Crabbe purchased the campus of a small defunct prep school near Onchiota, New York, in the Adirondack Mountains. Renamed Buster Crabbe's Meenahga Lodge[6] the camp advertised itself as swim camp for youngsters age eight to 14, with at least one swim instructor from Hawaii. Using the school's auditorium, along with professionally made costuming and scenery, a couple of musical plays were staged by the campers during the summer under the guidance of several counselors with drama training.[citation needed] Although scheduled to make at least one appearance at the camp each summer, while filming Captain Gallant of the Foreign Legion, he supposedly needed an emergency appendectomy which prevented his attending.

During this period of his life, Buster joined the swimming pool company Cascade Industries of Talmadge Road, Edison, New Jersey. In his capacity as Vice President of Sales, promoter and spokesman for Cascade - the world's first "package pool" company - he attended shopping mall openings and fairgrounds combining promotion of his swim camps and Cascade vinyl liner in-ground swimming pools. A pool line was named after him, and pools were sold by "Buster Crabbe Dealers" throughout the eastern seaboard and southern states from 1952 until 1990. By the late 1960s Buster Crabbe "Cascade" pools were available in more than 28 countries worldwide. Crabbe remained a spokesman for Cascade until his death.[citation needed] The "Cascade Pools" name is still in operation in the US, UK and New Zealand and one US pool company in Missouri is called "Buster Crabbe Pools" while an above-ground pool supplier "Aqua Sports" markets the Buster Crabbe line, so Buster's name lives on in the world of recreational swimming.[citation needed] Though he followed other pursuits, he never stopped acting, however, his career in the 1950s and after was limited to lower budget films.

He appeared in the 1982 feature film, The Comeback Trail one year before his death. Crabbe also appeared in television commercials[7] for Hormel Chili, Icy Hot, and the Magic Mold Bodyshirt, an upper body male girdle of sorts, which purportedly helped in weight loss. Through Icy Hot, he was actively involved in arthritis education. Despite his numerous film and television appearances, he is best remembered today as one of the original action heroes of 1930s and 1940s cinema. In the '50s, two comic book series were published named after him. Eastern Color published 12 issues of Buster Crabbe Comics from 1951–53, followed by Lev Gleason's The Amazing Adventures of Buster Crabbe for four issues in 1954. He died on April 23, 1983 of a heart attack after tripping over a wastebasket in his Scottsdale, Arizona home.