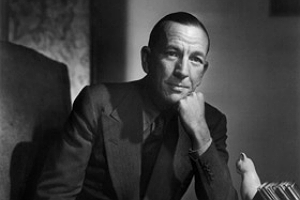 British actor, director, dramatist, playwright, producer, lyricist and composer. Coward was born into a musical family of genteel poverty who had to struggle to pay their bills. His strong-willed mom had to take in "paying guests" to make ends meet. Noel's education was spotty at best and he made a stage debut at the age of 12.

Though he wrote his first play at 19, he was 25 by the time it was produced. His celebrity began with the success of "The Vortex," 1924. An artist who expressed his best ideas with flippant repartee, his wit became legendary. He loved fun and hated boredom, couching a shrewd and often biting analysis of political correctness in the turn of a phrase that incited laughter.

He was famous by the age of 24 and considered a somewhat scandalous figure, a closet homosexual. As the gay lifestyle not easily accepted at that time, he kept his sexual nature covert. The doyen of postwar Britain, he lived in a whirl of constant cocktail parties. More recent biographers are beginning to reveal more of Coward's own private life; one of his lovers was Prince George, a grandson of Queen Victoria.

Coward wrote two autobiographical books, "Present Indicative" in 1937 and "Future Indefinite" in 1954. He embarked on a world tour at 27. While at the Chapel Royal School in Clapham, England, he developed a fine singing voice and acquired dramatic training at the Italia Conti Academy. During WWI, he enlisted in the Artist's Rifle but was discharged due to health reasons. Coward's "Private Lives" was written in just five days. Produced in 1930, it still is a popular vehicle for the theater, as well as "Blythe Spirit," produced in 1941.

Between 1929 and 1932 he was reputedly the highest paid playwright in the world. In addition to writing the words and music, he also produced most of his plays and acted in several. In 1955 he was playing Las Vegas for $30,000 a week. His melodies and lyrics remain part of our lives, such as "I'll See You Again," "Somewhere I'll Find You" and "Mad About the Boy."

Behind the dilettante façade, Coward has been described as hard-working, professional, an acerbic critic and man of taste. He once said that "work is more fun than fun." He expressed himself with clever and flippant repartee. World traveled, he seldom stayed long anywhere until her discovered his beloved Jamaica. In 1970, he was Knighted.