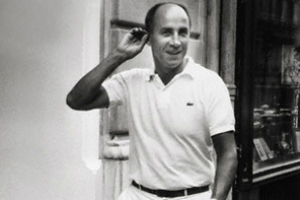 French fashion designer with the most influential impact on his field since Dior's "New Look." The designer who future-shocked the style world fashioned his original ideas while growing up in the Pyrenees mountains. He became an engineer to please his dad before entering design in 1948. The son of a château majordomo and his wife, André set out for Paris at 22 to learn from the great Cristobal Balenciaga in 1950.

By 1961 he was designing his own line of haute couture. When he left Balenciaga to promote his own line, he took Coqueline Barrière with him. A lively, dark-haired woman, she became his partner, muse, and in 1966, his wife.

Slight, sensitive and mercurial in mood, he withdrew for a while in bitterness over fashion piracy in 1965, but returned to open his own house in 1967. That year, feeling that creativity was at a low point, he produced a spring-summer show that would make-or-break him, it was so innovative. When his models pranced down the runway in his new styles, they started a fashion revolution. The thigh-high skirts were so heart-stopping that they made the Parisian couture crowd gasp, and "la mini" was born. Within three hours of the show, the buzz swept the fashion world. (Later, London designer Mary Quant claimed to have originated the mini.)

Courrèges limits his fashions to a small collection sold in his 14 boutiques but heads a licensing empire that reportedly grosses an annual $285 million with such products as champagne and gourmet foods. Wearing his trademark pink shirt and pants, oversize glasses and white boots, he is still thrilled by the excitement and danger of being on the cutting edge of fashion.