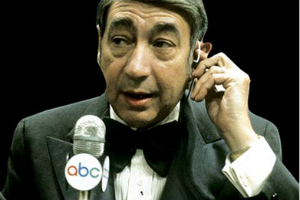 American sports broadcaster and commentator. He virtually invented and re-defined sports casting with his unique, blunt and caustic style. He is perhaps the most controversial and provocative broadcaster in the history of sports on radio and television. He had a slouch, a toupee and a Phi Beta Kappa key, and with a voice that could shatter glass, he broke the mold, an original. For 14 years on Monday Night Football, he was the most loved or most hated sportscaster.

Cosell was raised in Brooklyn, New York, the son of an accountant and grandson of a Rabbi. Cosell wanted to be a newspaperman but was urged by his parents to pursue a career in law. In the US Army, he rose to the rank of Major during WWII. A top student, he graduated from New York University School of Law in 1940. His clients were often those in sports and the entertainment industry, stimulating an increase in his innate interest in sports. In 1953, he was hired to host an ABC Radio Little League Show, a panel show of youngsters interviewing professional players. This project was scheduled to run originally for six weeks but remained on the air for five years. Cosell juggled the show along with his law career until 1956 when he was offered a radio spot on ABC.

In 1944, he married Mary Edith Abrams, whom he affectionately called Emmy. He described her as being the most important person in his life. Together they had two daughters, Jill and Hillary, who went on to give them five grandchildren.

Cosell's manner was acerbic, sarcastic and egotistical, still no one could call a play as he did. He quickly became a celebrity with his flair for show business and love of center stage. He was often described as 'the man you love to hate." His tell-it-like-it-is personality won him much praise as well as criticism. He is quoted as saying, "I told it the way I thought it was and still tell it the way I think it is." Off-camera he appeared somewhat insecure, yet Cosell was courageous and ignored the abuse. He was misunderstood by most writers and disliked by his colleagues. He would work without a script or notes, just his remarkable memory and constant rage. Cosell's impressive and large vocabulary was acquired from studying English literature at NYU during his early years.

In 1972, Cosell covered the Olympics in Munich, Germany. ABC enjoyed huge ratings from "Monday Night Football" which came to be his legacy. In 1984, after 14 years he withdrew from this position. He was the author of an autobiography "Cosell," 1973.

In 1988, his beloved wife underwent surgery for lung cancer and died in November 1990. Cosell never recovered from this loss, retreating into his New York apartment and moving into obscurity. In June 1991, he had a cancerous tumor removed from his chest, also dealing with heart disease and Parkinson's disease. In 1994, he was too ill to attend the ceremony inducting him into the Television Hall of Fame. He died from heart embolism on 4/23/1995, at the age of 77 in Manhattan, New York.