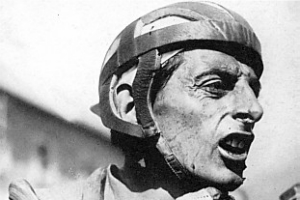 Angelo Fausto Coppi, (15 September 1919 – 2 January 1960), was the dominant international cyclist of the years each side of the Second World War. His successes earned him the title Il Campionissimo, or champion of champions. He was an all-round racing cyclist: he excelled in both climbing and time trialing, and was also a great sprinter. He won the Giro d'Italia five times (1940, 1947, 1949, 1952, 1953), the Tour de France twice (1949 and 1952), and the World Championship in 1953. Other notable results include winning the Giro di Lombardia five times, the Milan – San Remo three times, as well as wins at Paris–Roubaix and La Flèche Wallonne and setting the hour record (45.798 km) in 1942.

Coppi was one of five children born to Domenico Coppi and his wife, Angiolina Boveri, who married on 29 July 1914. Fausto was the fourth child, born at 5pm on 15 September 1919. His mother wanted to call him Angelo, but his father preferred Fausto. He was named Angelo Fausto but was known most of his life as Fausto.

Coppi had poor health as a child and showed little interest in school. In 1927 he was condemned to write "I ought to be at school, not riding my bicycle" after skipping lessons to spend the day riding a family bike he had found in a cellar, rusty and without brake blocks. He left school at 13 to work for Domenico Merlani, a butcher in Novi Ligure more widely known as Signor Ettore.

Cycling to and from the shop and meeting cyclists who came there interested him in racing. The money to buy a bike came from his uncle, also called Fausto Coppi, and his father. Coppi said:

"...My uncle was a merchant navy officer on a petrol tanker, and a real cycling fan. He was touched when he heard of my passion for the bike and decided that I deserved a real tool for the job on which I had set my heart, instead of the rusty old crock I was pushing around. I just cried with joy when my kind uncle gave me the 600 lire that were to make my dream come true. I knew from advertisements I had seen in the local papers that for 600 lire I could get a frame built to my measurements in Genoa. Out of my slender savings I took enough for the train fare to Genoa and back, gave my measurements, and handed over the 600 lire. I would have to buy the fittings and tyres from my errand-boy salary. Oh how my legs used to ache at night through climbing all those stairs during the day! But I'm glad I did, because it surely made my legs so strong." "Come back within a week your frame will be ready" said the owner of the cycle shop." "But it wasn't ready, and not the next week, and not the next. For eight weeks I threw precious money away taking the train to Genoa and still no made-to-measure bike for me. The fellow just couldn't be bothered making a frame for a skinny country kid who didn't look as if he could pedal a fairy-cycle, let alone a racing bike. I used to cry bitterly as I went back home without the frame. On the ninth journey I took a frame home. But it wasn't a 'made to measure'. The chap just took one down off the rack. I was furious inside, but too shy to do anything about it."

He rode his first race at 15, among other boys not attached to cycling clubs, and won 20 lire and a salami sandwich for first prize. Coppi took a racing licence at the start of 1938 and won his first race, at Castelleto d'Orba, near the butcher's shop. He won alone, winning an alarm clock.

A regular caller at the butcher's shop in Novi Ligure was a former boxer who had become a masseur, a job he could do after losing his sight, in 1938. Giuseppe Cavanna was known to friends as Biagio. Coppi met him that year, recommended by another of Cavanna's riders. Cavanna suggested in 1939 that Coppi should become an independent, a class of semi-professionals who could ride against both amateurs and professionals. He sent him to the Tour of Tuscany that April with the advice: "Follow Gino Bartali!" He was forced to stop with a broken wheel. But at Varzi on 7 May 1939 he won one of the races counting to the season-long national independent championship. He finished seven minutes clear of the field and won his next race by six minutes.

When Fausto won and you wanted to check the time gap to the man in second place, you didn't need a Swiss stopwatch. The bell of the church clock tower would do the job just as well. Paris–Roubaix? Milan – San Remo? Lombardy? We're talking 10 minutes to a quarter of an hour. That's how Fausto Coppi was.

His first large success was in 1940, winning the Giro d'Italia at the age of 20. In 1942 he set a world hour record (45.798 km at the Velodromo Vigorelli in Milan) which stood for 14 years until it was broken by Jacques Anquetil in 1956. His career was then interrupted by the Second World War. In 1946 he resumed racing and achieved remarkable successes which would be exceeded only by Eddy Merckx. The veteran writer Pierre Chany said that from 1946 to 1954 Coppi was never once recaught once he had broken away from the rest.

Twice, 1949 and 1952, Coppi won the Giro d'Italia and the Tour de France in the same year, the first to do so. He won the Giro five times, a record shared with Alfredo Binda and Eddy Merckx. During 1949's Giro he left Gino Bartali by 11 minutes between Cuneo and Pinerolo. Coppi won the 1949 Tour de France by almost half an hour over everyone except Bartali. From the start of the mountains in the Pyrenees to their end in the Alps, Coppi took back the 55 minutes by which Jacques Marinelli led him.

In 1952 Coppi won on the Alpe d'Huez, which had been included for the first time that year. He attacked six kilometres from the summit to rid himself of the French rider, Jean Robic. Coppi said: "I knew he was no longer there when I couldn't hear his breathing any more or the sound of his tyres on the road behind me." He rode like "a Martian on a bicycle", said Raphaël Géminiani. "I saw a phenomenal rider that day." Coppi won the Tour by 28m 27s and the organiser, Jacques Goddet, had to double the prizes for lower placings to keep other riders interested. It was his last Tour, having ridden three and won two.

Comparing riders from different eras is a risky business subject to the prejudices of the judge. But if Coppi isn't the greatest rider of all time, then he is second only to Eddy Merckx. One can't judge his accomplishments by his list of wins because World War II interrupted his career just as World War I interrupted that of Philippe Thys. Coppi won it all: the world hour record, the world championships, the grands tours, classics as well as time trials. The great French cycling journalist, Pierre Chany says that between 1946 and 1954, once Coppi had broken away from the peloton, the peloton never saw him again. Can this be said of any other racer? Informed observers who saw both ride agree that Coppi was the more elegant rider who won by dint of his physical gifts as opposed to Merckx who drove himself and hammered his competition relentlessly by being the very embodiment of pure will.