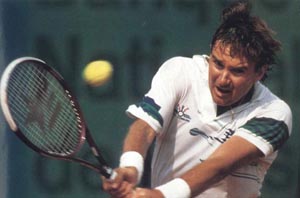 Columbus, USA Hard Brian Gottfried 7-5, 6-0 James Scott ("Jimmy") Connors (born September 2, 1952 in East St. Louis, Illinois) is a former American tennis champion who was the world number one player for 160 consecutive weeks from July 1974 to August 1977. He was also the World No. 1 player an additional 8 times during his career. He won eight Grand Slam singles titles and two Grand Slam doubles titles. He is considered to be one of the top male tennis players of all time. Currently, he is coaching American tennis player Andy Roddick.

Career
In 1970, Connors played his first international matches and recorded his first significant victory in the first round of the Pacific Southwest Open in Los Angeles, defeating Roy Emerson.

In 1971, Connors won the NCAA singles title while attending the University of California, Los Angeles. He also won his first international tournament in Jacksonville, Florida as an amateur. He turned professional in 1972 and won the Jacksonville tournament again.

Connors's competitiveness on court quickly made him stand out. He refused to accept that he was beaten and gave everything on every point of every game, no matter how apparently hopeless the cause. He also was not averse to playing to the crowd (he once remarked that "I want to bring the crowd into the match: in short, turn it into a football game") or abusing his opponent or the umpire—anything he could think of to give himself an edge. His brash behaviour both on and off court earned him a reputation as the brat of the tennis world. He acquired the nickname of the "Brash Basher of Belleville" (after the St Louis suburb where he grew up). His high-profile romance with fellow teen tennis prodigy Chris Evert in the early years of his career also helped to keep him in the headlines.

Connors also acquired a reputation as a maverick in 1972 when he refused to join the newly formed Association of Tennis Professionals (ATP), the union that was embraced by most male professional players. He avoided the mainstream of professional tennis to play in, and dominate, a series of smaller tournaments organized by Bill Riordan, his manager and a promoter.

In 1974, Connors and Riordan began filing lawsuits, eventually amounting to U.S. $10 million, against the ATP and its president Arthur Ashe for allegedly restricting Connors' freedom in the game. It started when Connors was banned from the French Open in 1974 after he had signed a contract to play World Team Tennis (WTT) for Baltimore. The ATP and the French Tennis Federation opposed WTT because it conflicted with the French Open; therefore, all entries to the French Open from WTT players were refused.

The French Open was the only Grand Slam tournament that Connors did not win in 1974. He won the Australian Open, defeating Phil Dent in four sets in the final. Connors then beat Ken Rosewall in straight sets in the finals of both Wimbledon and the U.S. Open. Therefore, his exclusion from the French Open possibly prevented him from becoming the first male player since Rod Laver to win all four Grand Slam singles titles in one year. Though he reached the semifinals on four occasions, Connors never won the French Open, failing to achieve a Career Grand Slam.

In 1975, Connors was the runner-up in the three Grand Slam singles tournaments he had won the year before. The 1975 Wimbledon final was a duel between lawsuit opponents, as Connors lost to Ashe in what most consider to have been a great upset. Shortly thereafter, Connors dropped the lawsuits and parted with Riordan.

That year, Connors won two highly touted "Challenge Matches," both arranged by Riordan and televised nationally by CBS Sports from Caesars Palace in Las Vegas. The first match, in February, was against Rod Laver, fourteen years Connors' senior at age 36. Connors won that match, billed as a U.S. $100,000 winner-take-all, 6-4, 6-2, 3-6, 7-5. In April, Connors played the man who had beaten him in the Australian Open final, John Newcombe, in a match billed as a U.S. $250,000 winner-take-all. Connors won the match in four sets.

In 1976, Connors met Björn Borg, the new Wimbledon champion, in the final of the U.S. Open, which was now being played on clay. Connors saved four set points in a third-set tiebreak to beat the Swede 6-4, 3-6, 7-6(9), 6-4. Connors finished 1976 as the top ranked player for the third consecutive year.

Despite his success, Connors remained an independent character. At Wimbledon in 1977, he refused to participate in a parade of former champions to celebrate the tournament's centenary and was booed when he played in the final the following day. He lost in five sets to Borg, who a month later was able briefly to interrupt Connors' long hold on the #1 ranking. Connors then lost in the final of the U.S. Open to Guillermo Vilas.

Having irritated sponsors and tennis officials by shunning the end-of-year Masters championships for the previous three years, Connors entered the competition for the first time in January 1978. In the round-robin portion of the tournament, which had just moved to New York City, Connors lost a celebrated late-night match to Vilas 6-4, 3-6, 7-5 but took the title by defeating Borg in the final 6-4, 1-6, 6-4.

Borg beat Connors comfortably in the 1978 Wimbledon final, but Connors defeated the Swede 6-4, 6-2, 6-2 in the final of the 1978 U.S. Open, which was held for the first time at the Flushing Meadows venue. By winning the first Grand Slam tournament ever held on hard courts, Connors became the first male tennis player to have won Grand Slam singles titles on three different surfaces: grass (1974), clay (1976), and hard court (1978).

Connors lost his stranglehold on the #1 ranking to Borg in early 1979. He returned to the French Open in May, losing in a semifinal. He also lost in the semifinals at Wimbledon and the U.S. Open, repeating those results in 1980 and 1981. His best win during these years was in 1980, when he took his second WCT Finals by defeating the defending champion, John McEnroe.

In 1982 at age 30, Connors was back in the Wimbledon singles final, where he faced McEnroe, who by then was established firmly as the world's top player. Connors recovered from being three points away from defeat in a fourth set tiebreak to win the match 3-6, 6-3, 6-7, 7-6, 6-4 and claim his second Wimbledon title, eight years after his first.

Connors then defeated another of the next generation of tennis stars, Ivan Lendl, in the U.S. Open final and soon regained the #1 ranking. He beat Lendl again in the 1983 U.S. Open final.

Connors' last Grand Slam final came at Wimbledon in 1984, where he again faced McEnroe. This time, McEnroe won easily 6-1, 6-1, 6-2. Though beaten, Connors' competitive fire was certainly not dampened. Asked afterwards if he now admitted his rival was the better player, he simply replied, "Never."

A low point in Connors' career occurred on February 21, 1986, when he was defaulted in the fifth set of a semifinal match against Lendl at the Lipton International Players Championships in Boca Raton, Florida after being angered by the officiating. He paid a U.S. $20,000 fine and accepted a 10-week suspension from the professional tour, starting March 30. He was forced to miss the French Open, marking the first time that any player had missed a Grand Slam tournament due to suspension. He subsequently lost in the first round at Wimbledon and the third round at the U.S. Open, a tournament where he had made at least the semifinals for twelve consecutive years.

Connors gradually transformed himself into a respected elder of the tennis world in the later years of his career. He continued to compete forcefully against much younger men until he was well into his 41st year.

In July 1988, Connors ended a four-year title drought by winning the Sovran Bank Tennis Classic in Washington, D.C. It was the 106th title of his career. Connors had played in 56 tournaments and 12 finals since his previous victory in the Tokyo Indoors against Lendl in October 1984.

At the 1989 U.S. Open, Connors defeated the third seed (and future two-time champion), Stefan Edberg, in straight sets in the fourth round and pushed sixth-seeded Andre Agassi to five sets in a quarterfinal.

The defining moment of Connors' later career came in 1991. His career had seemed to be at an end in 1990, when he played only three tournament matches (and lost all three), dropping to No. 936 in the world rankings. But after surgery on his deteriorating left wrist, he came back to play 14 tournaments in 1991. An ailing back forced him to retire from a five-set match in the third round of the French Open against Michael Chang, the 1989 champion. But Connors made an improbable run to the U.S. Open semifinals at the age of 39. On his birthday, he defeated 24-year-old Aaron Krickstein 3-6, 7-6(8), 1-6, 6-3, 7-6(4) in 4 hours and 41 minutes, coming back from a 2-5 deficit in the final set. Connors was then defeated in a semifinal by the reigning French Open champion, Jim Courier.

During his career, Connors won a record 109 men's singles titles. He also won 15 doubles titles (including the men's doubles titles at Wimbledon in 1973 and the U.S. Open in 1975).

In his 1979 autobiography, Jack Kramer, the long-time tennis promoter and great player himself, ranks Connors as one of the 21 best players of all time. Connors was inducted into the International Tennis Hall of Fame in Newport, Rhode Island in 1998 and has his own star on the St. Louis Walk of Fame.

On July 24, 2006, at the start of the Countrywide Classic tournament in Los Angeles, American tennis player Andy Roddick formally announced his partnership with Connors as his coach.

Personal life
Connors and Chris Evert had planned to marry in October 1973 , but it was called off.

In 1980, Connors married playboy model Patti McGuire. They have two children and live in the Santa Barbara, California area.

In the spring of 2006, Connors had successful hip replacement surgery at Cedars-Sinai Medical Center in Los Angeles.

Style of play
Undoubtedly Connors' strongest asset was his extremely powerful flat, double-handed backhand. In an era when topspin was becoming the rage, Connors was one of the few players to hit the ball flat and low. Connors' forehand was in the continental grip and also hit flat. While not as formidable as his backhand it shared with his backhand the great advantage of requiring relatively little energy to hit powerfully. This is perhaps one of the reasons for Connors' unusually long 26 years as a tennis professional (excluding his time on the senior's circuit). Connors was known to practice no more than two hours a day and felt satisfied enough in his game not to improve his serve, which was accurate but slow relative to the standards of the day. Connors was unusual in being able to combine a solid baseline game with aggressive charges to the net and agile mid-court play.

Connors' game was highly reliant on precision and to obtain this experimented extensively with lead tape wound around the head of his racet.

Connors was noted for continuing to use the all-steel Wilson T-2000 tennis racquet for a long time, despite the fact that most professionals had switched to graphite / graphite composite racquets. He did eventually switch to a Slazenger Panther Pro Ceramic racquet.

Connors also commentates for the BBC during the Wimbledon Championships. This often conincides with John McEnroe's own stints as an analyst and commentator, often leading to much banter between the two former arch rivals. Connors has also developed a trademark verbal tic when commentating, which is noticeable when after a good shot or winner has been hit by a player, Connors will register his approval by muttering, 'hmm.' he liked to grab the ball by the hunches.