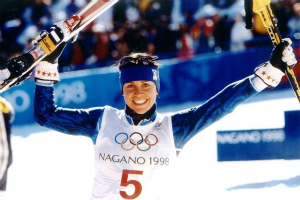 As early as 1987 Deborah was junior Giant Slalom World Champion. In the same year she made her debut in the World Cup, obtaining the fourth place in Val d'Isère downhill. In January 1988 she suffered her first injury at her right knee. When she was just fully recovering, in 1990, she got injured again and risked even more when she had to undergo an emergency surgery for a kidney infection.

She was back on the slopes in 1991-92, when she appeared in her first spot on the podium in S.Caterina Giant Slalom. In the same season she won her first World Cup race, Morzine Super-G and collected several second places. In Albertville, during the Winter Olympics she surprised everybody when she won the Super-G Gold Medal. Two days later, however, she fell in the Meribel Giant Slalom and broke her left knee.

Once back from this injury, she chose to give up downhill races and to concentrate on the technical disciplines. After a long recovery she had a quite good season in 1993-94, when she won three World Cup races to clinch the sixth overall place in the final ranking. Finally, the most important appointment was with Lillehammer Winter Games. The ghost of Meribel couldn't stop her from winning the Giant Slalom Gold Medal.

Debora won two more races between 1994 and 1995, but she had to face one more injury during the summer of 1995. This kept her far from the tracks until January 1996. In her comeback race she made it clear that she was not finished; second in Maribor, she won her first World Championship gold medal in Sierra Nevada Giant Slalom, to close her season with a success in Narvik GS. During the summer of 1996 she finally managed to practice without problems, concentrating on Slalom and Giant Slalom only. The result was excellent.

In Semmering, Deborah won her first Slalom, to later take four consecutive victories in World Cup GS's. So that she won the Giant Slalom Cup, ending up third in the Slalom Cup and fourth in the overall ranking.

The most impressive performance was the double win in Sestrière World Championships, where she got both the Slalom and the GS gold medals.

In the 1997/98 Deborah established two records, even though she didn't make it to the Giant Slalom Cup. She collected nine straight Giant Slalom victories and, most remarkably, became the first ever to win a Gold Medal in three different Olympic Games (1992,1994,1998).

Debora became engaged to Allesandro Bennetton in 1999. After their marriage, they had a daughter, Agnese, on 8/17/2000, Samedan, Switzerland.