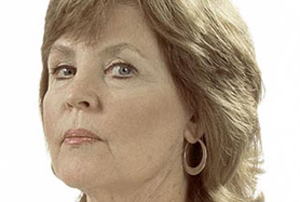 Pauline Collins OBE (born 3 September 1940) is an Academy Award-nominated English actress who is best known for playing Sarah in Upstairs, Downstairs and for playing the title role in Shirley Valentine.

Early life and career
Collins was born in Exmouth, Devon of Irish Catholic extraction and studied at the Central School of Speech and Drama in London. Before turning to acting, she worked as a teacher until 1962. She made her stage debut at Windsor in A Gazelle in Park Lane in 1962 and her West End debut in Passion Flower Hotel in 1965, and many stage roles followed. Her first film was Secrets of a Windmill Girl (1965).

Collins played Samantha Briggs in the 1967 Doctor Who serial The Faceless Ones and was offered the chance to continue in the series as a new companion for the Doctor, but she declined.

Other early TV credits include the UK's first medical soap Emergency Ward: 10 (1957), and the pilot episode and first series of The Liver Birds, both in 1969.

Collins first became well known for her role as the maid Sarah in the hit 1970s ITV drama series Upstairs, Downstairs, which was co-created by her co-star Jean Marsh. The character appeared regularly throughout the first two series, the second of which also starred her actor husband, John Alderton, with whom she later starred in a spin-off, Thomas & Sarah (1979), and the sitcom No, Honestly, as well as in a series of short story adaptations called Wodehouse Playhouse (1975-78). She also appeared alongside Alderton in the successful series Forever Green (1989–1992) and co-narrated the animated British children's TV series Little Miss with him in 1983.

Shirley Valentine and recent years
In 1988, Collins starred in the one-woman play Shirley Valentine in London, reprising the role on Broadway in 1989 and in the 1989 film version, and winning a number of awards, as described below.

Collins' film credits include City of Joy (1992, co-starring Patrick Swayze), My Mother's Courage (1995 in Germany as Mutters Courage, released in the USA in 1997), Paradise Road (1997, with Glenn Close and Cate Blanchett), and Mrs Caldicot's Cabbage War (2001), another appearance with Alderton. In 1999 and 2000, Collins starred as Harriet Smith in the BBC television drama The Ambassador, where she played the lead role of the British ambassador to Ireland. Other television credits include The Saint, The Wednesday Play, Armchair Theatre, Play for Today, Tales of the Unexpected, Country Matters, and The Black Tower.

In 2002, she guest starred in Man and Boy, the dramatisation of Tony Parsons' best-seller. In 2005 she appeared as Miss Flite in the BBC production of Charles Dickens' Bleak House.

In 2006, she became only the third actor to have been in both the original and new series of Doctor Who, appearing in the episode "Tooth and Claw" as Queen Victoria.

Later in 2006, she appeared in Extinct, a programme where eight celebrities campaigned on behalf of an animal to save it from extinction. Collins campaigned to save the Bengal tiger and won the public vote.

In December 2007, she appeared as the fairy godmother in the pantomime, Cinderella, at the Old Vic in London

Personal life
She married actor John Alderton in 1969 and lives in Hampstead, London, England, with her husband and their three children, Nicholas, Kate and Richard. She also has an older daughter, Louise, whom she gave up for adoption. The pair were reunited when Louise was 22 years old, and Collins wrote a book, Letter to Louise, about her experiences.