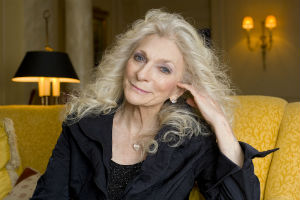 Judith Marjorie "Judy" Collins (born May 1, 1939) is an American singer and songwriter known for her eclectic tastes in the material she records (which has included folk, show tunes, pop, rock and roll and standards) and for her social activism. She is an alumna of MacMurray College, Jacksonville, Illinois.

Collins was born in Seattle, Washington, where she spent the first ten years of her life. Her father took a job in Denver in 1949, and the family moved to Colorado. Collins studied classical piano with Antonia Brico, making her public debut at age 13, performing Mozart's Concerto for Two Pianos. Brico took a dim view, both then and later, of Collins's developing interest in folk music, which led her to the difficult decision to discontinue her piano lessons. Years later, when Collins had become internationally known through her music, she invited Brico to one of her concerts in Denver. When they met after the performance, Brico took both of Collins' hands in hers, looked wistfully at her fingers and said, "Little Judy—you really could have gone places." Still later, Collins discovered that Brico herself had made a living when she was younger playing jazz and ragtime piano (Singing Lessons, pp. 71–72). She also had the fortune of meeting many musicians through her blind father, a Seattle radio program host.

It was the music of Woody Guthrie and Pete Seeger, and the traditional songs of the folk revival of the early 1960s, however, that piqued Collins' interest and awoke in her a love of lyrics. Three years after her debut as a piano prodigy, she was playing guitar. Her music became popular at the University of Connecticut, where her husband taught. She performed at parties and for the campus radio station along with David Grisman and Tom Azarian.  She eventually made her way to Greenwich Village, New York City, where she busked and played in clubs until she signed with Elektra Records, a record label she was associated with for 35 years. In 1961, Collins released her first album, A Maid of Constant Sorrow, at the age of 22.

At first she sang traditional folk songs or songs written by others — in particular the protest poets of the time, such as Tom Paxton, Phil Ochs, and Bob Dylan. She recorded her own versions of important songs from the period, such as Dylan's "Mr. Tambourine Man" and Pete Seeger's "Turn, Turn, Turn". Collins was also instrumental in bringing little-known musicians to a wider public. For example, she recorded songs by Canadian poet Leonard Cohen, who became a close friend over the years. She also recorded songs by singer-songwriters such as Ian Tyson, Joni Mitchell, Randy Newman, Robin Williamson and Richard Fariña long before they gained national acclaim.

While Collins' first few albums comprised straightforward guitar-based folk songs, with 1966's In My Life, she began branching out and including work from such diverse sources as The Beatles, Leonard Cohen, Jacques Brel, and Kurt Weill. Mark Abramson produced and Joshua Rifkin arranged the album, adding lush orchestration to many of the numbers. The album was regarded[by whom?] as a major departure for a folk artist and set the course for Collins' subsequent work over the next decade

With her 1967 album Wildflowers, also produced by Mark Abramson and arranged by Rifkin, Collins began to record her own compositions, beginning with "Since You've Asked". The album also provided Collins with a major hit, and a Grammy award, in Mitchell's "Both Sides, Now", which reached Number 8 on the Billboard Hot 100.

Collins' 1968 album, Who Knows Where the Time Goes, was produced by David Anderle and featured back-up guitar by Stephen Stills (of Crosby, Stills & Nash), with whom she was romantically involved at the time. (She was the inspiration for Stills's CSN classic "Suite: Judy Blue Eyes"). Time Goes had a mellow country sound, and included Ian Tyson's "Someday Soon" and the title track written by the UK singer-songwriter Sandy Denny. The album also featured Collins' composition "My Father" and one of the first covers of Leonard Cohen's "Bird on the Wire".

By the 1970s Collins had a solid reputation as an art song singer and folksinger and had begun to stand out for her own compositions. She was also known for her broad range of material: her songs from this period include the traditional Christian hymn "Amazing Grace", the Stephen Sondheim Broadway ballad "Send in the Clowns" (both of which were top 20 hits as singles), a recording of Joan Baez's "A Song for David", and her own compositions, such as "Born to the Breed".

In the 1970s Collins guest starred on The Muppet Show, where she sang "Leather-Winged Bat", "I Know An Old Lady who Swallowed a Fly", "Do Re Mi" and "Send in the Clowns". She also appeared several times on Sesame Street, where she performed "Fishermen's Song" with a chorus of Anything Muppet fishermen, sang a trio with Biff and Sully using the word "yes", and even starred in a modern musical fairy tale skit called "The Sad Princess".

She sang the theme song of the Rankin-Bass TV movie The Wind in the Willows.

In more recent years Collins has taken to writing, producing a memoir, Trust Your Heart, in 1987, and a novel, Shameless. A more recent memoir, Sanity and Grace, tells of her son Clark's death in January 1992. With help from her manager Katherine DePaul she started Wildflower Records. Though her record sales are not what they once were, she still records and tours in the U.S., Europe, Australia, and New Zealand. She performed at President Bill Clinton's first inauguration in 1993, singing "Amazing Grace" and "Chelsea Morning". (The Clintons have stated that they named their daughter, Chelsea, after Collins' recording of the song.) In 2006, she sang "This Little Light of Mine" in a commercial for Eliot Spitzer.

In 2008 she oversaw an album featuring artists ranging from Dolly Parton and Joan Baez to Rufus Wainwright and Chrissie Hynde covering her compositions; she also released a collection of The Beatles covers, and she received an honorary doctorate from Pratt Institute on May 18 of that year. In 2010, Collins sang "The Weight of the World" at the Newport Folk Festival, a song by Amy Speace.

In July 2012, Collins appeared as a guest artist on the Australian SBS television show RocKwiz.

Like many other folk singers of her generation, Collins was drawn to social activism. Her political idealism also led her to compose a ballad entitled "Che" in honor of the 1960s Marxist icon Che Guevara.

Collins sympathized with the Yippie movement, and was friendly with its leaders, Abbie Hoffman and Jerry Rubin. On March 17, 1968, she attended Hoffman's press conference at the Americana Hotel in New York to announce the party's formation. In 1969, she testified in Chicago in support of the Chicago Seven; during her testimony, she began singing Pete Seeger's "Where Have All the Flowers Gone?", and was admonished by prosecutor Tom Foran and judge Julius Hoffman.

She is currently a representative for UNICEF and campaigns on behalf of the abolition of landmines.

Collins contracted polio at the age of eleven and spent two months in hospital in isolation.

Collins has been married twice. Her first marriage in 1958 to Peter Taylor produced her only child, Clark C. Taylor. The marriage ended in divorce in 1965.

In 1962, shortly after her debut at Carnegie Hall, Collins was diagnosed with tuberculosis and spent six months recuperating in a sanitorium.

Collins later admitted suffering from bulimia after she had quit smoking in the 1970s. "I went straight from the cigarettes into an eating disorder", she told People magazine in 1992. "I started throwing up. I didn't know anything about bulimia, certainly not that it is an addiction or that it would get worse. My feelings about myself, even though I had been able to give up smoking and lose 20 lbs., were of increasing despair." She also talks at length, in Singing Lessons (pp. 172–190, 238–240), about her years of addiction to alcohol, the damage it did to her personal and musical life and how it contributed to her feelings of depression. She says that, although she tried other drugs in the 1960s, alcohol was always her primary drug of choice, just as it had been for her father. She entered a rehabilitation program in Pennsylvania in 1978, and she has maintained her sobriety ever since, even through such traumatic events as the suicide of her only child, Clark. In 1992, he committed suicide at age 33 after a long bout with clinical depression and substance abuse. Since his death, she has also become a strong advocate of suicide prevention.

In April 1996, she married designer and fellow activist Louis Nelson, whom she had been seeing since 1979. They live together in New York City.

Her sister, Holly, was married to actor James Keach and they have a son, Kalen.

Stephen Sondheim won a Grammy Award for Song of the Year, "Send in the Clowns", in 1975, it was believed, largely on the strength of Collins' performance of the song on her album Judith.

Nominated with Jill Godmilow for an Academy Award for the documentary "Antonia: A Portrait of the Woman" (1975), about her classical piano instructor, conductor Antonia Brico.

Honorary Doctor of Fine Arts Degree from Pratt Institute, May 2009