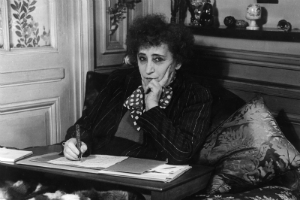 French writer of voluptuous fiction, drama, criticism, and literary correspondence for a newspaper. Colette's personal life was a bedroom farce with male and female lovers who included her husband's 18-year-old son while he ran off with a Romanian aristocrat. A complete sensualist and libertine, amid her extraordinary carnal energy, she managed to produce some 50 volumes, journalism, film scripts and an average five letters a day. Throughout her long and unconventional life, France's greatest woman writer devoured with the passionate hunger of an emotional glutton all the sensations of love and hate, sex and ecstasy, jealousy and pain, joy and grief that she could absorb, digest and regenerate. Along with sexual abandon, she danced naked in theaters and music halls. Her books spoke openly of sex from the awakening urges of teenagers to the last desperate flings of fading courtesans, the longings of young women and ménages a trois between people of all ages and sexual tastes.

Colette's birth was a difficult one after 48 hours of labor for her mother. Her father was an ex-army officer who had lost a leg in battle and had been pensioned as a district tax collector. A distant figure in her life, he was well-meaning but vague, where her mom, a passionate and earthy woman known as Sido, "was the most important person in my life," she later wrote. Her mom was the daughter of a one-fourth black father who had many illegitimate children. Colette had an older mongoloid sister and two older brothers.

As a child, she was pretty and a tomboy, with a triangular face and flashing eyes, her long hair in braids. Precocious and clever, she was anxious from youth for a great love to illumine her life.

Her first lover was the most notorious and decadent boulevardier of the Belle Époque, Henri Gauthier-Villars, who was visiting the area to visit his illegitimate child by a former mistress. Colette was 17 and he, 15 years older. Though fat, balding and ugly, he was a witty bon vivant who enchanted the young girl. After a two-year engagement, they married on 15 May 1893 and moved to Paris the next day.

Paris was the place to be. It was a period of bohemian leisure and sizzling frivolities and café society buzzed with the latest delicious gossip. Music halls and fancy parties flourished alongside artists and writers and slumming aristocracy. The drugs of choice were absinthe, morphine and opium. Colette absorbed it all. She learned rapidly that her husband was a vain egotist, a gossip, a user and a womanizer. During the 13 years they were together, she loved and hated her "Willy."

In May 1905, Colette finally tired of Willy's dominance and petty tyranny, and she left him. Having learned to care for the ministrations of her female lovers, she moved in with wealthy 43-year-old Sophie Mathilde Adele Denise de Morny, "Missy," one of the most notorious lesbians of the era, who was her lover, protector and mother-figure. They were together for six years that opened another chapter of experience to Colette. She called this openly lesbian period "her vagabond years."

For a while, she made an attempt at a stage career. Despite her enthusiasm and semi-nudity, she had no acting talent or training. Her most outstanding role was also her most scandalous, taken from the book she wrote, "Reve d'Egypte," a mime ballet about an archeologist, played by Missy, who discovers a mummy who turns out to be a beautiful, seductive maiden, played by Colette. Opening night at the Moulin Rouge became a riot with jeers, catcalls, cheers, and fistfights.

In 1910, Colette began an affair with Auguste Heriot, the heir to a department-store fortune. He was young, handsome, rich and besotted with her. Though he wanted to marry her, she found him a toy to play with until she met her great love. It happened the following year. She met 35-year-old Baron Henri de Jourvenel, "Sidi", co-editor of the prestigious Paris newspaper Le Matin. One day in June 1911, he declared that he could not live without her. Sidi's mistress, in fury and despair, turned to the comforting arms of Heriot!

Colette moved in with Sidi and began writing for his paper. When she became pregnant, they married and had a daughter in July 1913. Her relationship with her daughter was never close.

Sidi became increasingly interested in other matters, mostly love affairs, and Colette found solace in Quiji boards, witchcraft and voodoo, and finally, food. Her weight went up to 180 lbs. In her book "Cheri," an aging courtesan has a love affair with a young man. She had already written the book when, in the summer of 1920, Bertrand, the 17-year-old son of her husband by his first wife, came to visit. He was good looking, shy and innocent. His appeal was so great that many of Colette's companions tried to seduce the boy, but it was Colette, at 47, who initiated the erotic affair that lasted nearly five years. In late October 1923, Sidi found out about the affair during an argument over dinner. He moved out, but Bertrand stayed for another year and a half. Perhaps he was, indeed, the love of her life, the great love for which she had always longed. Bertrand went on to become a political journalist who always carried the memory of his first love, his Colette.

In the summer of 1925, she was now middle-aged and fat, but still breathed voluptuousness, melancholy and passion. She met her last great love, Maurice Goudeket, age 36 to her 53. They married two years later and were together to her death. They had a seaside house in Saint-Tropez, and Colette wrote, traveled, did screenplays and reminiscences. It was perhaps her most productive and happy period; "Gigi" was published when she was 71. The attempt of a business venture was not as successful, a beauty salon that failed.

The most difficult time of all was when Goudeket, a Jew, was taken away by the Nazis, and for 14 agonizing months, was kept in custody before he was released. By now, Colette suffered from crippling arthritis in her hip. She died at 81, on 3 August 1954, Paris, France.