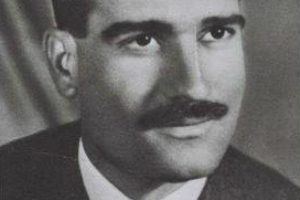 Eliahu (Eli) ben Shaoul Cohen (16 December 1924 – 18 May 1965) was an Israeli spy. He is best known for his espionage work in 1961 - 1965 in Syria, where he developed close relationships with the political and military hierarchy and became the Chief Adviser to the Minister of Defense. Syrian counter-intelligence authorities eventually uncovered a spy conspiracy, tried and convicted Cohen under pre-war 'martial law' to death penalty in 1965. The intelligence he gathered is claimed to have been an important factor in Israel's success in the Six Day War.

In 2005, he was voted the 26th-greatest Israeli of all time, in a poll by the Israeli news website Ynet to determine whom the general public considered the 200 Greatest Israelis.

Cohen was born in Alexandria to a devout Jewish and Zionist family in 1924. His father had moved there from Aleppo in 1914. In January 1947, he chose to enlist in the Egyptian Army as an alternative to paying the prescribed sum all young Jews were supposed to pay, but was declared ineligible on grounds of questionable loyalty. Later that year, he left university and began studying at home after facing harassment by the Muslim Brotherhood. In the years following the creation of Israel, many Jewish families left Egypt. Though his parents and three brothers left for Israel in 1949, Cohen remained to finish a degree in electronics and to coordinate Jewish and Zionist activities. In 1951, following a military coup, an anti-Zionist campaign was initiated, and Cohen was arrested and interrogated over his Zionist activities. Cohen took part in various Israeli covert operations in the country during the 1950s, though the Egyptian government could never verify and provide proof of his involvement in Operation Goshen, an Israeli operation to smuggle Egyptian Jews out of the country and resettle them in Israel due to increasing hostility there.

In 1955, a sabotage unit, made of Jewish Egyptian citizens and recruited by Israel's secret police, operated against their native Egypt and attempted to destroy Egyptian relationships with western powers. The unit bombed American and British installations expecting that this would be considered the work of Egyptians. Egyptian authorities uncovered the spy ring and after a trial, two of the group's members received the death penalty. Cohen had aided the unit and was implicated, however no link between Cohen and the accused could be found.

Following the Suez Crisis, the Egyptian government stepped up persecution of Jews and expelled many of them. In December 1956, Cohen was forced to leave the country. With the assistance of the Jewish Agency, he emigrated to Israel, arriving in the Israeli port of Haifa in a vessel travelling from Naples, Italy.

In 1957, Cohen was recruited by the Israel Defense Forces, and was placed in military intelligence, where he became a counterintelligence analyst. His work bored him, and he attempted to join the Mossad. Cohen was offended when Mossad rejected him, and resigned from military counterintelligence. For the next two years, he worked as a filing clerk in a Tel Aviv insurance office, and married Nadia Majald, an Iraqi-Jewish immigrant, in 1959. They had three children, Sophie, Irit and Shai, and the family eventually settled in Bat Yam.

The Mossad recruited Cohen after Director-General Meir Amit, looking for a special agent to infiltrate the Syrian government, came across his name while looking through the agency's files of rejected candidates, after none of the current candidates seemed suitable for the job. For two weeks he was put under surveillance, and was judged suitable for recruitment and training. Cohen was then informed that the Mossad had decided to recruit him, and underwent an intensive, six-month course at the Mossad training school. His graduate report stated that he had all the qualities needed to become a katsa, or field agent.

He was then given a false identity as a Syrian businessman who was returning to the country after living in Argentina. To establish his cover, Cohen moved to Argentina in 1961.

The tactics of Cohen to build relations with Syrian high-ranked politicians, military officials, influential public figures and local foreign diplomacy community, have been carefully masterminded by Mossad. Details of his espionage tactics are classified and most probably will never be revealed to public. Cohen was a genius spy actor and exceeded all expectations of Mossad. He continued his social life as in Argentina, spending time in cafes listening to political gossip. He also held parties at his home, which turned into orgies for high-placed Syrian ministers, businessmen, and others, who used Cohen's apartment "for assignations with various women, including Defense Ministry secretaries, airline hostesses, and Syrian singing stars." At these parties such highly-placed officials would "talk freely of their work and army plans. Eli, who would feign intoxication, remained sober and listened carefully." In addition to providing loans to government officials and acting as an avid host, he was asked for advice by government officials, who were often intoxicated by the alcohol he freely provided. Cohen himself was not above the spicier part of a spy's life either. He had seventeen lovers in Syria, all dazzling beauties with a fair degree of family power." Some sources claim that he had established a good friendship with Amin al-Hafiz. In 2001 Hafez in interview with Al-jazeera distanced himself from Cohen he said that such a friendship would be impossible given the fact that he had been in Moscow until 1962. After Hafiz became Prime Minister, Cohen may even have been considered for the position of Syrian Deputy Minister of Defense, although Hafiz's secretary has denied that this was the case.

After establishing good relations with Syrian elite, Cohen embarked on the next stage - building strong confidence with many Syrian military and government officials. He became a confidant of George Saif, high up in the Ministry of Information. "The complete trust Cohen enjoyed among his unwitting informants is illustrated by the following incident, which might have had serious consequences for Cohen. One day he was sitting in Saif's office reading a classified document while the Syrian was on the phone. One of the ministry's directors entered the room unannounced. 'How is it that you dare allow a stranger to read a classified document?' he angrily asked Saif. Saif calmly replied, 'There's nothing to worry about. He's a trusted friend.'"

Cohen provided an incredible amount of intelligence data to the Israeli Army over a period of four years (1961-1965). Cohen sent intelligence to Israel by radio, secret letters, and occasionally in person, he secretly traveled to Israel three times. His most famous achievement was when he toured the Golan Heights, and collected intelligence on the Syrian fortifications there. Feigning sympathy for the soldiers exposed to the sun, Cohen had trees planted at every position. The trees were used as targeting markers by the Israeli military during the Six-Day War and enabled Israel to easily capture the Golan Heights in two days. Cohen made repeated visits to the southern frontier zone, providing photographs and sketches of Syrian positions.  Cohen learned of an important secret plan by Syria to create three successive lines of bunkers and mortars; the Israel Defense Forces would otherwise have expected to encounter only a single line. In 1964, Cohen secretly returned to his home in Bat Yam for the birth of his third child. He assured his wife that there would only be one more trip before he returned permanently.

Newly appointed Syrian Intelligence, Colonel Ahmed Su'edani trusted no one and disliked Cohen. Because of this, Cohen expressed his fear and wish to terminate his assignment in Syria during his last secret visit to Israel in November 1964 to pass intelligence and for the birth of his third child. Still, Israeli Intelligence asked him to return to Syria one more time. Before leaving, Cohen assured his wife that there would only be one more trip before he returned permanently.

In January 1965, Syrian efforts to find a high-level mole were stepped up. Using Soviet-made tracking equipment and assisted by hired Soviet experts, a period of radio silence was observed, and it was hoped that any illegal transmissions could be identified. After large amounts of radio interference were detected and traced to their source, on 24 January Syrian security officers broke into Cohen's apartment where he was caught in the middle of transmission to Israel. The leading figure in the break-in was the head of Syrian Intelligence, Colonel Ahmed Su'edani - Eli's nemesis.

After a trial before a military tribunal, he was found guilty of espionage and sentenced to death under 'martial law'. Cohen was said to have been repeatedly interrogated and tortured. Israel staged an international campaign for clemency, hoping to persuade the Syrians not to execute him. Israeli Foreign Minister Golda Meir lead a campaign, demanding the international community to force Damascus to consider the consequences of hanging Cohen. Diplomats, Prime Ministers, and Pope Paul VI try to intercede. She even appealed to the Soviet Union. Despite international appeals, and the governments of France, Belgium and Canada, to persuade the Syrian government to commute the death sentence, the death sentence decision was upheld. Despite the gravity of the state crime committed by Cohen against Syria, the authorities still allowed him to communicate letters with his wife, children and parents, while in prison. On 15 May 1965, Cohen wrote in his final letter:

"...I am begging you my dear Nadia not to spend your time in weeping about some thing already passed. Concentrate on yourself, looking forward for a better future!"

On May 18, 1965, Cohen was publicly hanged in Al-Marjah Square in Damascus. On the day of his execution, Cohen's 'last wish' to see a Rabbi was respected by the prison authorities. While on his way in a truck to Al-Marjah Square, he was accompanied by Nissim Andabo, the 80-year old Chief Rabbi of Syria.

In November 1965, Cohen's wife, Nadia sent a letter to Hafez al-Assad and asked his forgiveness for Eli's actions, hoping to receive remains of her husband. Requests by Cohen's family for his remains to be returned to Israel have been rejected by the Syrian authorities (as of September 2012). In February 2007 a Turkish official confirmed that his government was ready to act as a mediator for the return of Cohen's remains to his family from Syria. In August 2008 Monthir Maosily, the former bureau chief of the late Syrian leader Hafez al-Assad, said that Eli Cohen's burial site is unknown, claiming that the Syrians buried the executed Israeli spy three times, to stop the remains from being brought back to Israel via a special operation. Cohen's brothers, Abraham and Maurice, originally led the campaign to return his remains. Maurice died in 2006. Eli's widow, Nadia, has since led the campaign.

The film The Impossible Spy is a depiction of his life. He is featured at the International Spy Museum in Washington, D.C. A memorial stone has been erected to Cohen in the Garden of the Missing Soldiers in Mount Herzl in Jerusalem.