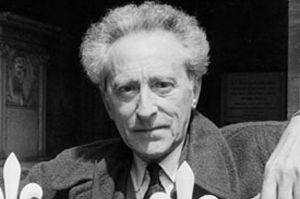 Early years
Cocteau was born in Maisons-Laffitte, a small town near Paris to Georges Cocteau and his wife Eugénie Lecomte, a prominent Parisian family. His father was a lawyer and amateur painter, who committed suicide when Cocteau was nine. At the age of fifteen, Cocteau left home. Despite his achievements in virtually all literary and artistic fields, Cocteau insisted that he was primarily a poet and that all his work was poetry. He published his first volume of poems, Aladdin's Lamp, at nineteen. Soon Cocteau became known in the Bohemian artistic circles as 'The Frivolous Prince'—the title of a volume he published at twenty-one. Edith Wharton described him as a man "to whom every great line of poetry was a sunrise, every sunset the foundation of the Heavenly City..."

In his early twenties, Cocteau became associated with Marcel Proust, André Gide, and Maurice Barrès. The Russian ballet-master Sergei Diaghilev challenged Cocteau to write for the ballet - "Astonish me," he urged. This resulted in Parade which was produced by Diaghilev, designed by Pablo Picasso, and composed by Erik Satie in 1917. An important exponent of Surrealism, he had great influence on the work of others, including the group of composer friends in Montparnasse known as Les Six. The word Surrealism was coined, in fact, by Guillaume Apollinaire to describe Parade, a work which was initially not well-received. "If it had not been for Apollinaire in uniform," wrote Cocteau, "with his skull shaved, the scar on his temple and the bandage around his head, women would have gouged our eyes out with hairpins."

Friendship with Raymond Radiguet
In 1918 he met the 15-year-old poet Raymond Radiguet. The two collaborated extensively, socialized, and undertook many journeys and vacations together. Cocteau also got the youth exempted from military service. In admiration of Radiguet's great literary talent, Cocteau promoted his friend's works in his artistic circle and also arranged for the publication by Grasset of Le Diable au corps (a largely autobiographical story of an adulterous relationship between a married woman and a younger man), exerting his influence to garner the "Nouveau Monde" literary prize for the novel.

There is disagreement over Cocteau's reaction to Radiguet's sudden death in 1923, with some claiming that it left him stunned, despondent and prey to opium addiction. Opponents of that interpretation point out that he did not attend the funeral (he generally did not attend funerals) and immediately left Paris with Diaghilev for a performance of Les Noces by the Ballets Russes at Monte Carlo. Cocteau himself much later characterised his reaction as one of "stupor and disgust". His opium addiction at the time,Cocteau said, was only coincidental, due to a chance meeting with Louis Laloy, the administrator of the Monte Carlo Opera. Cocteau's opium use and his efforts to stop profoundly changed his literary style. His most notable book, Les Enfants Terribles, was written in a week during a strenuous opium weaning.

It has been suggested that Cocteau's friendship with Radiguet was also an intense and often stormy love affair, but there is no documented evidence that this is true. See Historical pederastic relationships.

Maturity
In the 1930s, Cocteau had an unlikely affair with Princess Natalie Paley, the beautiful daughter of a Romanov grand duke and herself a fashion-plate, sometimes actress, model, and former wife of couturier Lucien Lelong. She became pregnant. To Cocteau's distress and Paley's life-long regret, the fetus was aborted. Cocteau's longest-lasting relationships were with the French actors Jean Marais, whom he cast in Beauty and the Beast and Ruy Blas, and Edouard Dermit, whom Cocteau formally adopted. Cocteau is also rumored to have carried on a relationship with Panama Al Brown, a boxer he managed during the 1930s, but no documented evidence of this relationship exists.

In 1940, Le Bel Indifférent, Cocteau's play written for and starring Édith Piaf, was enormously successful. He also worked with Picasso on several projects and was friends with most of the European art community. He struggled with an opium addiction for most of his adult life and was openly gay, though he had a few brief and complicated affairs with women. He published a considerable amount of work criticising homophobia.

Cocteau's films, the bulk of which he both wrote and directed, were particularly important in introducing Surrealism into French cinema and influenced to a certain degree the upcoming French New Wave genre.

Cocteau died of a heart attack at his chateau in Milly-la-Foret, France, on 11 October 1963 at the age of 74, only hours after hearing of the death of his friend, the French singer Édith Piaf. He is buried in the garden of his home in Milly La Foret, Essonne, France. The epitaph reads I stay among you

Awards and recognitions
In 1955 Cocteau was made a member of the Académie française and The Royal Academy of Belgium.