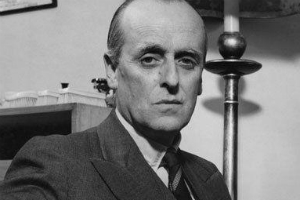 Eric was born in Hucknall in Nottinghamshire to William Harrison Coates (d. 1935), a surgeon, and his wife, Mary Jane Gwynne, hailing from Usk in Monmouthshire. After studying at home with a governess, Eric enrolled (1906) at the Royal Academy of Music in London, where he received viola lessons from Lionel Tertis and studied composition with Frederick Corder. From 1910 he played in the Queen's Hall Orchestra under Henry J. Wood, becoming principal violist in 1912, "... which post I held for seven years," he said, speaking in a 1948 BBC radio interview, "until, I regret to say, I was dismissed through sending deputies to take my place when I was conducting my works elsewhere. Henry Wood little knew what a great help he had been to me by dispensing with my services, for from that day I never touched my viola again and was able to devote all my time to my writing."

He had an early success with the overture The Merrymakers (1922), but more popular was the London Suite (1933). The last movement of this, "Knightsbridge", was used by the BBC to introduce their radio programme In Town Tonight. Amongst his early champions was Sir Edward Elgar.

Coates's autobiography, Suite in Four Movements, was published in 1953. He died in Chichester having suffered a stroke and was cremated at the Golders Green Crematorium. His son, Austin Coates (1922–1997), was a writer who lived much of his life in Asia.

Eric Coates was not related to Albert Coates, the contemporary conductor and composer.

Coates's music, with its simple and memorable melodies, proved particularly effective for theme music. As well as "Knightsbridge", the BBC also used Calling All Workers (1940) as the theme for the radio programme Music While You Work, and By the Sleepy Lagoon (1930) is still used to introduce the long-running radio programme Desert Island Discs. Coates' "Halcyon Days", the first movement of the suite The Three Elizabeths, was used as the theme to the popular 1967 BBC TV series The Forsyte Saga, although he received no credit. This piece was originally written in the early 1940s. It was later used as a celebration of the Coronation of Queen Elizabeth II. It has had a recent resurgence in popularity, featuring on a number of CDs.

Coates is also well known for his contribution to the film score for The Dam Busters (1954); he composed the famous main title march. He was unwilling to write the entire score when asked by the film's producers, but warmed to the idea of writing a signature march around which the rest of the film's score was based - in fact, he submitted a piece that he had recently completed, so the famous Dam Busters March was not itself composed with the film in mind. The final film score was completed by Leighton Lucas.

His songs, some with lyrics by Arthur Conan Doyle and Fred E. Weatherly, are less well remembered, despite their initial success. He wrote some thirty songs before turning his attention to orchestral works.

Miniature Suite was the first of many orchestral works by Coates. It was written in 1911, and consists of three movements - Children's Dance, Intermezzo and Scene du Bal.

Coates made a number of 78 rpm recordings of his music, initially for The British Columbia label and then for Decca Records (released in the U.S. on the London Records label). He recorded his London Suite and London Again Suite for Columbia. Some of his recordings were later issued on LP and CD. From the surviving recordings, it is clear that he was a very competent conductor, who benefited from advances in high fidelity recording.