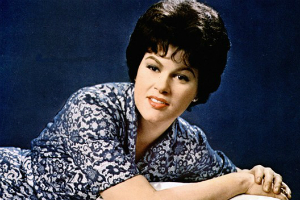 American country-western singer, who helped to pave the way for other female singers to become an integral part of the formerly male-dominated country music industry. In 1973, she became the first female solo performer elected to Country Music’s Hall of Fame.

Born Virginia Patterson Hensley, her family called her "Ginny" until she was almost 20. Her mother, Hilda, was just 16 years old when Ginny was born, and her parents had been married just six days earlier. Ginny had one younger brother, Sam (John), and two half-siblings from her father’s previous marriage, Tempie Glenn and Randolph. The family moved shortly after her birth, and over the next 13 years, they moved about 20 times. Her father, Samuel, deserted the family when she was 15, leaving her mother, Hilda, to provide for the children. Ginny’s next contact with her father was in 1956, when he was seriously ill with lung cancer; he died on 12/11/1956 and never heard her sing. As a child, Ginny wanted to become a dancer, and she won first place in a children’s dance competition; suddenly, however, she completely lost interest in dancing, and turned her focus toward music instead. She had no formal music training, but learned to play the piano by ear, and soon she was part of the Baptist church choir. Although working various jobs in order to help her mother support the family, Patsy, as she was now called, sang with local country bands. She was determined to get a recording contract, and in 1954, Four Star Records signed her.

Patsy recorded 17 singles between 1955 and 1960 but only one, "Walkin’ After Midnight," was a hit, making the Top 20. Overall her work during that period was a commercial failure, but by 1958 she was a regular performer on the Grand Ole Opry radio broadcasts. Once released from her original record deal, she began to record songs that she liked, beginning with "I Fall to Pieces," which hit number one on the country charts. This was a turning point in her career, and her voice sounded more confident and mature, ageless, wise and vulnerable. Through 1961-62, she had hits like "Crazy" and "She’s Got You," and her achingly romantic material was marketed as pop music, bringing her commercial success. Patsy, however, always preferred traditional country music and dressed in distinctly western-style clothing. Her last concert was a benefit, held in Kansas City, on 3/03/1963.

In 1953, Patsy married Gerald Cline. They had no children. In 1956, during a performance at a local dance, she met Charlie Dick, "the love of her life," prompting her to divorce Gerald. She married Charlie in 1957, and they had two children, Julia Simadore, 1958, and Allen Randolph, 1961.

At age 13, she developed rheumatic fever, a serious illness during which her heart stopped beating. She was treated in an oxygen tent, and when she recovered, her voice had changed, becoming deeper in tone. In 1961, Patsy, along with her brother Sam, was in a severe auto accident. The head-on collision sent Patsy through the windshield and nearly killed her. Although she survived, she was left with a visible scar on her forehead, and thereafter wore wigs during her public performances. After leaving Kansas City at 6:07 PM, Patsy, along with her manager, Randy Hughes, and two fellow entertainers, Cowboy Copas and Hawkshaw Hawkins, died in a plane crash in Camden, Tennessee, on 3/05/1963. Patsy’s short and tragic life was chronicled in the movie, "Sweet Dreams," and the effect she had on the music world can be summed up by what it says on her grave, "Death cannot kill what never dies…"