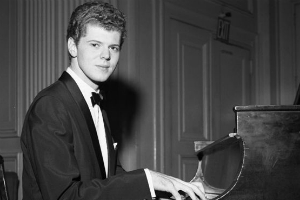 American musician who became famous in 1958 for winning the International Tchaikovsky Piano Competition in Moscow, playing against pianists from some 90 countries. He began piano lessons at three with his mom, Rildia Bee Cliburn, a former concert pianist; he later studied at Juilliard.

His blazing virtuosity and emotional extravagance were stunning. By 1962 Cliburn, music teachers and Fort Worth citizens had created the quadrennial event designed to set the stage for rising young stars, the first Van Cliburn International Piano competition that still continues on today.

By 1978, overwhelmed by expectations, crippled by stage fright and exhausted by his celebrity, Cliburn stopped performing and withdrew into the Fort Worth, Texas home that he shared with his mom. She died in mid-1994 at age 97.

During his nine years of self-imposed exile, he never abandoned the piano but played chamber music and pieces close to his heart. He went to the opera and hosted musical soirees for friends. The time gave him a much-needed respite from the demands of fame and a chance to reevaluate his perspective on life and recharge his energies.

On 7/09/1994, Cliburn kicked off his first tour in 16 years in San Diego, CA, dazzling a near-capacity crowd of 4,600 in an outdoor stadium. The tour had its official start three days later at the Hollywood Bowl in Los Angeles. Over the following six weeks, he performed in 15 American cities.

In April 1996, Thomas E. Zaremba, a 48-year-old mortician, filed a law suit stating that Cliburn had exposed him to the AIDS virus by having sex with other people who were HIV-positive during their 17-year-relationship. Cliburn denied that he had AIDS, and the District Judge dismissed the multi-million-dollar palimony suit.

On 27 August 2012, Cliburn's publicist announced that the pianist had advanced bone cancer. He underwent treatment and was "resting comfortably at home" in Fort Worth, where he received around-the-clock care. Cliburn died on 27 February 2013, at the age of 78.