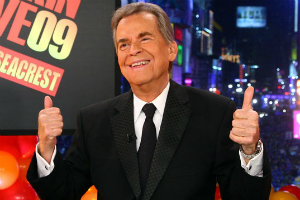 American television personality frequently called "the oldest living teenager." Dick Clark has introduced three generations to pop music, running the gamut from Elvis Presley to Madonna, as the host on the television show "American Bandstand." The role of emcee served him well, as over the years Clark as simultaneously hosted hit shows on all three major networks and syndication, most notably the "Pyramid" game shows. Clark, one of two sons of a cosmetic salesman and a homemaker, grew up in Mount Vernon, New York and demonstrated his talent for being in the center of a social whirlwind from his earliest days. At age five he published a neighborhood gossip sheet and sold it for two cents a copy. He idolized radio personality Arthur Godfrey and at age 13, his father took him to a live radio broadcast featuring Gary Moore and Jimmy Durante. Clark was instantly hooked.

Along with discovering his niche, Clark's teenage years held family tragedy. His brother Brad, five years his senior, joined the Army Air Corps after graduating high school and became a fighter pilot. "He flew a P-47 mission one day during the Battle of the Bulge and ...he crashed. He didn't reach his 21st birthday. I miss him to this day. Even now I fantasize that they made a mistake and my brother will come walking through that door. My mother did that till the day she died."

After the war, Clark's father took a job managing a radio station in Utica, New York so his only living son could have a shot at broadcasting. Clark enrolled in Syracuse University as a radio and worked at the station during the summers, serving as his Dad's assistant and part time announcer. His television debut came in 1951 as "Cactus Dick," hosting a local country music show.

One year later Clark was employed at WFIL in Philadelphia with his own radio show and commuted to New York to do beer commercials. His success at promoting Schaefer beer came to an abrupt end when brewery owner Rudy Schaefer removed him because he looked too young to be drinking alcohol. But Clark's youthful, clean cut all-American appearance was made to order for his next job. In 1956, when the host of a new Philadelphia music show was arrested for drunk driving and thus fired, newcomer Clark stepped in as replacement. Within months after going to network in 1957, "American Bandstand" skyrocketed to the nation's highest-rated daytime show. Clark was the Pied Piper of pop music in America during the late fifties and early sixties, serving as the national disc jockey and showcasing the best musical acts of the day. As a cultural statement, the show blurred the color line before other entertainment mediums did. "A lot of radio stations wouldn't play the black version of a song." Clark recalled. "But I could see that times were changing. We integrated without an incident. It would have been great if the world could have done that too."

Clark's sudden fame and fortune screeched to an abrupt halt in 1960, when a music industry payola scandal hit. Exploiting his position, Clark had set up several companies to press and distribute the records that he played on his show. While the practice was not illegal, a congressional investigation determined that it was a conflict of interests and Clark was forced by the network to divest himself of the record companies at a loss of eight million dollars. "It was a nightmare. You're terrified. Your family is disrupted. You think you're going to lose your job." He didn't. Four years later the show relocated to Los Angeles where it weathered the rest of the turbulent sixties. "It was a very self-destructive time. Much worse than it is now... As an adult and a parent I was very disturbed about what was being said to the kids about drugs. We even had big stars nodding off on camera." Despite sweeping cultural changes, the show grew in popularity and Clark was able to rebuild his empire. He was to remain the host of "American Bandstand" for 33 years, the longest running entertainment show in television. Clark began hosting "New Year's Rockin' Eve," his infamous New Year's Eve special, in 1971. Every December 31st he wakes up at 4 a.m. to begin a day of preparations for the evening's broadcast.

In 1973 the indefatigable Clark also began hosting the "$25,000 Pyramid" game on TV which led to his hosting "The American Music Awards" in 1974. Radio show "Countdown America" began in 1981 and "TV's Bloopers and Practical Jokes" in 1984. Along the way Clark decided to try his hand in other areas of entertainment. He has produced 200 TV specials including "Elvis" in 1979 and "Promised a Miracle" in 1988. Among the 20 movies he has produced have been "The Young Doctors" in 1961 and "Remo Williams" in 1985. Clark has also written six books, most notably "Rock, Roll and Remember." He is the founder and director of Unistar Radio Network, which hosts beauty pageants, comedy and award shows and produces "Good Ol' Rock and Roll" stage shows in Las Vegas. As many driven people, he suffers the periodic disease of depression.

Frequently attacked by critics who claim that Clark wastes his talents and resources by cranking out shows that lack substance, Clark's answer is "What I do isn't necessarily my personal taste in entertainment, but it is what people want. I don't pretend it's great art. That's not what I'm here for."

Off camera, Clark is known as a driven perfectionist and demanding taskmaster with an ego-deflating temper. "I hate lazy people, liars and, most of all, excuse makers." A patron of perpetual youth, Clark lifts weights and exercises to be able to look two decades younger than his actual age. The fountain of youth has become a two-edged sword; "It's a little like being a female sex symbol. They're constantly told how wonderful they look but it gets to be a drag after a while, because someday the looks have gotta go. It would be nice to be allowed to age gracefully. Besides, it all in the genes. If you want to stay young looking, pick your parents carefully." Clark maintains that he thinks young because "two-thirds of the people who work at our place are under 30."

Clark's first two marriages ended in divorce. He and his first wife, teenage sweetheart Barbara Mallery, had a son Richard in 1952. Loretta Martin, Clark's former secretary and second wife, had two children, son Duane, born 1959 and daughter Cindy in 1960. While custody of the children went to their mothers, Clark remained on good terms with all of them. Richard, known as RAC, is following in his father's footsteps as host of his Dad's syndicated lip-sync show "Puttin On The Hits." In 1970, Clark and Minnesota-bred, Kari Wigton, a former dancer who later worked as an assistant to North Dakota Senator Quentin Burdick before joining Clark's empire as a secretary, set up housekeeping together. Marrying seven years later, they maintain homes in Malibu Beach, California and Manhattan. When Clark gets introspective, he sums up his career succinctly. "I started out with music and kids dancing to records and have expanded upon that into a lot of areas, most of which are not memorable...I've been real lucky to be involved in so many people's lives. Not just famous people, but everyday people, ordinary people who say 'Gee, you were part of my life. I grew up with you'...And those are terrific compliments."

On 21/19/2001, Clark sued National Academy of Recording Arts and Sciences head Michael Greene, 52, for $10 million, claiming Greene unfairly prohibited musicians such as Michael Jackson and Britney Spears from performing on the Grammys if they also performed on Clark's American Music Awards.

Clark admitted in April 2004 that he suffered from Type II diabetes with which he had been diagnosed in 1994. In December 6, 2004, he had a stroke and was unable to host his traditional New Year's Eve broadcast from Times Square.