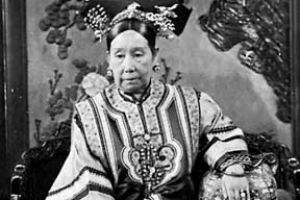 Powerful and charismatic woman who unofficially but effectively controlled the Manchu Qing Dynasty in China for 47 years, from 1861 to her death in 1908.

Cixi was the daughter of Huizheng, an ordinary official from the Manchu Yehenara clan. Palace archives also show that Huizheng was a member of the Bordered Blue Banner of the Eight Banners, and was working in Beijing during the year of Cixi's birth, indicating that Cixi was born in Beijing.

In 1851 at age 15, Cixi participated in the selection for consorts to the new Emperor Xianfeng alongside sixty other candidates. Cixi was one of the few candidates chosen to stay, and was created Worthy Lady Yi. Among the other chosen candidates were Worth Lady Li of Tatala clan (later Consort Li), Concubine Yun of Wugiya clan, and Concubine Zhen of Niuhuru clan (later Xianfeng's empress consort).

Unlike many other women in the imperial harem, Cixi was known for her ability to read and write Chinese. This granted her ample opportunities to help the ailing emperor in daily state governing. On various occasions, Emperor Xianfeng had Cixi read palace memorials for him, and leave instructions on the memorials according to his will. As a result, Cixi became well-informed about state affairs, and learned the art of state governing from the ailing emperor.