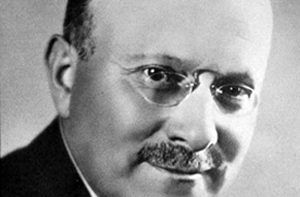 André-Gustave Citroën (5 February 1878 – 3 July 1935) was a French industrialist. He is remembered chiefly for the make of car named after him, but also for his application of double helical gears.

Born in Paris in 1878, André-Gustave was the 5th and last child of Jewish parents, diamond merchant Levie Citroen from the Netherlands and Macha Kleinan (of Warsaw, Poland). He was a cousin of the British philosopher Sir A. J. Ayer (the only son of his aunt Reine).

The Citroen family moved to Paris from Amsterdam in 1873. Upon arrival, the diaeresis was added to the name (reputedly by one of André's teachers), changing Citroen to Citroën (a grandfather had been a greengrocer and seller of tropical fruit, and had taken the surname of Limoenman, literally "lime man", his son however preferred Citroen, Dutch for "lemon"). His father committed suicide when André was six years old (presumably after failure in a business adventure in a diamond mine in South Africa).

It is reputed that the young André was inspired by the works of Jules Verne and had seen the construction of the Eiffel Tower for the World Exhibition, making him want to become an engineer.

André was a graduate of the École Polytechnique in 1900. In that year he visited Poland, the birthland of his mother, who had recently died. During that holiday he saw a carpenter working on a set of gears with a fish-bone structure. These gears were less noisy and more efficient. Citroën bought the patent for very little money. Leading to the invention that is credited to Citroën: double helical gears. Also reputed to be the inspiration of the double chevron logo of the Citroën brand.

In 1906 he was installed as a director for the automotive Mors (automobile) company where he was very successful.

During World War I, he was responsible for mass production of armaments.

Citroën founded the Citroën automobile company in 1919, leading it to become the fourth-largest automobile manufacturer in the world by the early 1930s (specifically 1932).

Beside being an able engineer, Citroën was also a gambler, leading to the bankruptcy of his company. The company was taken over by the main creditor Michelin, who had provided tires for the cars.

He died in Paris, France, of stomach cancer in 1935 and was interred in the Cimetière du Montparnasse, the funeral being led by the Chief Rabbi of Paris.

On 9 October 1958, while the Motor show was running, the city fathers renamed the Quai de Javel as the "Quai André-Citroën", in recognition of the transformation effected since the city's 15th arronsissement, two generations earlier characterized by market gardening, had been selected by Citroën as the location for Europe's first mass-production car plant. This was the second celebrity name for the street which in 1843 had been baptised "Quai de Javal", in recognition of the chemical factory that had been set up to produce a range of industrial acids, and which later numbered the well known eponymous "Eau de Javel" (bleach) among its products.

In 1992, the Parc André Citroën public garden in Paris was named after him. It was built on the site of the former Citroën automobile manufacturing plant, which operated until its closure in the 1970s, and which had been demolished during an eight year period between 1976 and 1984.

In 1998 André-Citroën was inducted into the Automotive Hall of Fame in Dearborn, Michigan.