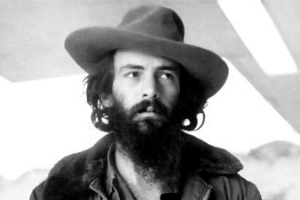 Camilo Cienfuegos Gorriarán (February 6, 1932 – October 28, 1959) was a Cuban revolutionary born in Lawton, Havana. Raised in an anarchist family that had left Spain before the Spanish Civil War, he became a key figure of the Cuban Revolution, along with Fidel Castro, Che Guevara, Juan Almeida Bosque, and Raúl Castro.

In 1940 Camilo enrolled in the Escuela Nacional de Bellas Artes "San Alejandro", but soon after had to quit his studies due to financial problems. During this period he started working as an apprentice in the "El Arte" fashion store in downtown Havana.

Around 1948 he started to get involved in political issues, taking part in the popular protests against the rise of the bus tariffs.

In 1954 he became an active member of the underground students movement against Dictator Fulgencio Batista. This involvement led him to be wounded by firearm on December 7, 1955, during a popular protest organized to honor Cuban independence hero Antonio Maceo. After being harassed by police and without a job, he decided to leave Cuba and travelled again to the U.S., in particular to New York. He was later expelled from the U.S., when his residence permit expired, and relocated to Mexico.

During his stay in Mexico, Camilo met Fidel Castro, who was organizing a revolutionary expedition that would return to Cuba to fight Batista. Thereafter Cienfuegos was one of the 82 revolutionaries who set sail aboard the boat Granma in November 1956. Allegedly, he was the last one to board the boat and was only allowed to join because of his thinness.

The Granma arrived in Cuba on December 2. After a three day nightmare of swamps and mangroves, the rebels were surprised by the Cuban (Batista's) army at Alegría de Pío. The surviving rebels escaped in small dispersed groups, wandering for weeks in the Sierra Maestra mountains. Camilo was one of the twelve who survived the attacks and executions carried out by Batista's forces not long after they landed. He was able to rejoin Castro in the Sierra Maestra a month later.

In 1957 he became one of the top leaders of the revolutionary forces, appointed to the rank of "Comandante". In 1958, with the defeat of Operation Verano (Summer), Cienfuegos was put in command of one of three columns which headed west out of the mountains with the intention of capturing the provincial capital city of Santa Clara. Che Guevara was in command of another column and Jaime Vega was in command of the third. Jaime Vega's column was ambushed and defeated by Batista's forces.

Cienfuegos and Guevara's two columns reached the central provinces, where they joined efforts with several other groups. Cienfuegos's column fought the Battle of Yaguajay in December and, after a fight, forced the garrison to surrender on December 30, 1958. This earned him the nickname "The Hero of Yaguajay". With Yaguajay captured, Cienfuegos's column was able to advance against Santa Clara in conjunction with Guevara's forces, and the other non-Castro forces from the Escambray front. Together, the two columns captured Santa Clara on December 31; most of the defending soldiers gave up without shooting. Batista fled Cuba the next day, and the guerrillas were victorious.

Later, Cienfuegos would serve in the Cuban Army's high command, fight anti-Castro uprisings, and play a role in agrarian reforms.

There has been debate as to Cienfuegos's political leanings. He came from a Spanish anarchist family and believed strongly in the tenets of Anarchism. Cuban author and historian Carlos Franqui suggests otherwise in his book, Family Portrait With Fidel. Franqui, one of Cienfuegos's closest friends during the Cuban revolution, asserts that Cienfuegos "sympathized with socialism" and that he followed the Marxist Che Guevara politically. Other sources tend to agree with Franqui. Both Cienfuegos's father and his brother, Osmany, were, and in Osmany's case still are, radical leftists. What we do know from their own writings, statements, and deeds is that many leaders of the 26th of July Movement, including Raul Castro and Che Guevara, is that they were in the far left of the political spectrum. Both Camilo and his brother Osmany were on that side of the spectrum, but not dogmatic in their political beliefs.

Several days before his death, Cienfuegos arrested his former revolutionary comrade Huber Matos on Castro's orders. Comandante Matos had complained to Fidel Castro that the 26th of July Movement was being rapidly infiltrated by communists, who were assuming positions of power. Receiving no response, Matos sent a letter to Fidel relinquishing his position as military chief of Camaguey province (October 20). Cienfuegos was under the impression that Matos was leading an open revolt, but he found that was not the case. Nevertheless he carried out the arrest.

On October 28, 1959, Cienfuegos's Cessna 310 ('FAR-53') disappeared over the ocean during a night flight from Camagüey to Havana. An immediate search was called which lasted several days, but no plane could be found. By November the search was called off and Cienfuegos was presumed lost. He quickly became a new hero for the Cuban revolution.

Rumors concerning Cienfuegos's disappearance have been rife. Some have speculated that Cienfuegos was killed on the orders of Fidel Castro; These rumors have been difficult to uphold, however, as Cienfuegos had appeared exceptionally loyal to Castro throughout his involvement, and had vigorously supported the arrest of Matos only days earlier. Che Guevara, who was also close to Cienfuegos (naming his son Camilo after the fallen revolutionary), dismissed any rumors of Castro's involvement. Another rumor circulating was that a Cuban air force fighter plane shot Cienfuegos down mistaking his plane for a hostile intruder. Historians seem to agree that Cienfuegos's death is more likely to have been an accident, and not the result of foul play.

A museum to Camilo Cienfuegos was built after his death in Yaguajay, at the site of the barracks defended by Batista's forces during the 1958 battle. The army base is now a hospital. The museum includes a diorama of the battle, as well as artifacts relating to Cienfuegos' life before, during and after the revolution. A large statue of him is on top of the museum, which is similar in size and design to the Che Guevara Mausoleum in Santa Clara.

The Order of Cienfuegos

Cuba has named a socialist order, the Order of Cienfuegos after Camilo Cienfuegos.

“Few men have succeeded in leaving on every action such a distinctive personal mark. He had the natural intelligence of the people, who had chosen him out of thousands for a privileged position on account of the audacity of his blows, his tenacity, his intelligence, and unequalled devotion. Camilo practiced loyalty like a religion.”

On every October 28 school children from all over Cuba throw flowers into the sea (or into a river if they live inland) to honor Camilo Cienfuegos.

In October 2009, in honor of the 50th anniversary of his death, a 100 ton steel outline of Camilo's face was added to the side of the Ministry of Informatics and Communications building at the Plaza de la Revolución. Accompanying the stencil facade are the words "Vas bien, Fidel" (You’re doing fine, Fidel), representing the famous response of Camilo to Fidel at the January 8, 1959 rally where Castro declared that the Columbia military barracks would be made into a school, and then asked Camilo, "Am I doing all right, Camilo?"

Camilo is also remembered on the 20 Cuban peso bill and the 20 Cuban convertible peso bill. He was also pictured in the now discontinued 40 cent coins.

The University of Matanzas bears the name "Camilo Cienfuegos."