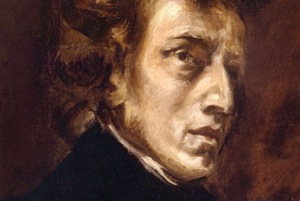 Polish classical composer and virtuoso pianist of the Romantic era, he was recognized as a musical prodigy at age eight and hailed as the next Mozart. His was the first Polish musician to be enjoyed worldwide.

Son of a French-born high school teacher, Chopin was born in a small village in Poland. He was an effeminate, attractive, passive, intriguing, mysterious, private and misunderstood man. During his teenage years, he achieved local celebrity status, gaining praise for the short, simple, bittersweet pieces he composed on the piano. He composed his first two polonaises at age seven.

On 11 October 1830, he gave his last public performance in Warsaw. Three weeks later, he boarded a train headed for Vienna, then ultimately to Paris. He settled there during September 1831. By the time he reached his 22nd birthday, he was considered one of the most celebrated figures in France. While in Paris, he became a piano teacher and recitalist to the elite while composing best-selling sheet music. He was also a talented mimic who enjoyed the pleasures of an active social life.

Chopin held a nine-year relationship with writer Baroness Aurore Dudevant. She was six years older than he and his exact opposite in personality. Dudevant was masculine, aggressive, independent, and assertive; the famed George Sand. She was the inspiration for many of his musical pieces during the early part of their courtship. After a bitter quarrel in 1847, they permanently separated.

Always prone to fragile emotional and physical health, Chopin contacted tuberculosis. Recurring illnesses seemed to plague him throughout his life. At 18, he suffered his first nervous breakdown. Between the winter of 1837 and 1838, his health rapidly deteriorated as he endured severe coughing fits. He died in Paris on 17 October 1849 at 2 a.m. from advanced pulmonary tuberculosis.

Most of Chopin's works were not publicized until after his death. Upon his request, his heart was removed from his body and placed in the wall of the Church of the Holy Cross in Warsaw. On 13 October 1849, he received the viaticum from the Abbey Alexander Jelowick.