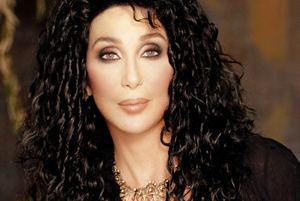 American entertainer, a singer, actress and television host, commonly referred to by the media as the 'Goddess of Pop.' Cher has been described as embodying female autonomy in a male-dominated industry. She is known for her distinctive contralto singing voice and for having worked in numerous areas of entertainment, as well as adopting a variety of styles and appearances during her six-decade-long career.

Her father, John Sarkisian, was an Armenian-American truck driver with drug and gambling problems; her mother, Georgia Holt (born Jackie Jean Crouch), was an occasional model and bit-part actress who claimed Irish, English, German, and Cherokee ancestry. Her parents divorced when Cher was ten months old. Her mother later married actor John Southall, with whom she had another daughter, Georganne, Cher's half-sister.

Now living in Los Angeles, Cher's mother changed her name to Georgia Holt and played minor roles in films and on television. Her mother's relationship with Southall ended when Cher was nine years old. Holt remarried and divorced several more times, and she moved her family around the country (including New York, Texas, and California). In 1961, Holt married bank manager Gilbert LaPiere, who adopted Cher (under the name Cheryl LaPiere) and Georganne.

At age 16, Cher dropped out of school, left her mother's house, and moved into Los Angeles with a friend. She took acting classes and worked to support herself, dancing in small clubs along Hollywood's Sunset Strip and introducing herself to performers, managers, and agents.

Cher met performer Sonny Bono in November 1962 when he was working for record producer Phil Spector. They performed their own unofficial wedding ceremony in a hotel room in Tijuana, Mexico, on 27 October 1964. The following year they borrowed $168 to record their song "Baby, Don't Go," which shot up the charts. Their next single, "I Got You Babe," June 1965, sold three million copies and made No.1 on the charts. Fans loved them and with their cool bell-bottom pants and vests they became style setters of the '60s.

In early 1968, they produced a film, "Chastity," a financial blunder in which they lost a half million dollars. Not only that, but the following year the IRS hit them with a bill for $200,000 in back taxes. To get their finances in order, they put together a nightclub routine and made their debut as Pat Boone's opening act at the Flamingo in Las Vegas. The public loved their act which featured biting repartee, mostly at Sonny's expense and which Cher delivered with an impassive face.

When their daughter was born on 4 March 1969, they named her Chastity. When she became a young adult, her announcement that she was lesbian hit hard at first but Cher turned around to be supportive.

Their TV series, "The Sonny and Cher Comedy Hour," was a great hit from its debut on 1 August 1971 until it closed with their separation in 1974. Their relationship had begun to unravel with the pressure of touring. In mid-November 1972, Cher told Sonny that she was in love with Bill Hamm, the guitarist in their band. For the sake of their careers, they maintained appearances. By August 1973 a cigarette girl at a nightclub had moved in with Sonny. They were sharing the same roof but with different - and changing - lovers. Their divorce was finalized on 26 June 1975.

Cher made a second marriage in 1976 to a whacked-out-dope-freak, Gregg Allman; their son Elijah was born in 1976.

In the '80s she suffered from the debilitating disease Epstein-Barr syndrome, fighting back with a program of vitamins, prayer, meditation and plenty of rest.

As her singing career waned, Cher became an estimable actress, winning the Best Actress Oscar on 11 April 1988 for "Moonstruck."

With a third major incarnation in late 1994, she was publicizing her new home-furnishings mail-order business and filming the movie, "Faithful."

Always a show-stopper for flamboyant style, she kept her body toned and trimmed with cosmetic surgery, and kept her social life buffed with young boyfriends.

Sonny Bono was killed in a skiing accident on 5 January 1998 when he hit a tree in South Lake Tahoe, California. Cher movingly eulogized the man who had been her first love at his funeral and hosted a CBS tribute on 20 May 1998.

Proving her career longevity once more, Cher put out a single in 1999 that made No.1 on the charts in mid-March, the song "Believe" and won the Best Dance Recording for "Believe" at the Grammys on 24 February 2000.