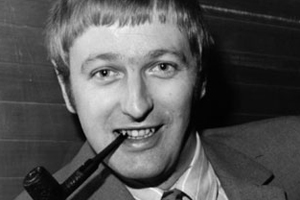 Dr. Graham Arthur Chapman (January 8, 1941 – October 4, 1989) was an English comedian, actor, writer, physician and one of the six members of the Monty Python comedy troupe. He was also the lead actor in their two narrative films, playing King Arthur in Monty Python and the Holy Grail and the title character in Monty Python's Life of Brian.

Education and early performances
Chapman was educated at Melton Mowbray Grammar School and studied medicine at Emmanuel College at the University of Cambridge, where he began writing comedy with fellow University student John Cleese. He qualified as a medical doctor at the Barts Hospital Medical College, but never practised medicine professionally.

While at Cambridge, Chapman joined Footlights. His fellow members included Cleese, Tim Brooke-Taylor, Bill Oddie, David Hatch, Jonathan Lynn, Humphrey Barclay, and Jo Kendall. Their revue A Clump of Plinths was so successful at the Edinburgh Fringe Festival that they renamed it Cambridge Circus, and took the revue to the West End in London and later New Zealand and Broadway in September 1964. The revue appeared in October 1964 on The Ed Sullivan Show.

Writing for the BBC
Chapman and Cleese wrote professionally for the BBC during the 1960s, primarily for David Frost, but also for Marty Feldman. Chapman also contributed sketches to the BBC radio series I'm Sorry, I'll Read That Again and television programmes such as The Illustrated Weekly Hudd (starring Roy Hudd), Cilla Black, This is Petula Clark, and This is Tom Jones. Chapman, Cleese, and Tim Brooke-Taylor then joined Feldman in the television comedy series At Last the 1948 Show. Chapman, and on occasion Cleese, also wrote for the long-running television comedy series Doctor in the House. Chapman also co-wrote several episodes with Bernard McKenna and David Sherlock.

In 1969 Chapman and Cleese joined Michael Palin, Terry Jones, Eric Idle and American artist Terry Gilliam for Monty Python's Flying Circus. Cleese and Chapman's classic Python sketches include “The Ministry of Silly Walks”, "Raymond Luxury Yacht", and “Dead Parrot”. One of Chapman's most famous characters was “The Colonel”, a stuffy army officer who occasionally appeared from nowhere ordering an end to the sketch for being "too silly". After Cleese left the series in 1973, Chapman wrote alone, although he did work with Neil Innes and Douglas Adams for the fourth and final series. He then developed a number of television and movie projects, most notably Out of the Trees, The Odd Job and Yellowbeard, in which he starred alongside Cleese, Peter Cook, Cheech and Chong and Marty Feldman, who died during the final days of production.

In the late 1970s, Chapman moved to Los Angeles, where he guest-starred on many US television shows, including The Hollywood Squares, Still Crazy Like a Fox, and the NBC sketch series The Big Show. Upon returning to England he became involved with the Dangerous Sports Club (an extreme sports club which introduced bungee jumping to a wide audience), and he began the first of a lengthy series of US college comedy lecture tours in the 1980s. His memoir, A Liar's Autobiography, was published in 1980 and, unusually for an autobiography, had five authors: Chapman, his partner David Sherlock, Alex Martin, David Yallop and Douglas Adams, who in 1977 was virtually unknown as a recent graduate fresh from Cambridge. Together they wrote a pilot for a TV series Out of the Trees, and Adams was mentored by Chapman, but they later had a falling out and did not speak for several years.

Chapman's last project was to have been a TV series called Jake's Journey. Although the pilot episode was made, there were difficulties selling the project. Following Chapman's death, there was no interest. Chapman was also to have played a guest role as a television presenter in the Red Dwarf episode “Timeslides”, but died before filming was to have started.

In the years since Chapman's death, only a few of his projects have actually been released. One such that has, is a play entitled O Happy Day, brought to life in 2000 by Dad's Garage Theatre Company in Atlanta, Georgia. Michael Palin and John Cleese assisted the theatre company in adapting the play. He also appeared in the Iron Maiden video, Can I Play with Madness.

Personal life
Chapman was an alcoholic from his time in medical school through the 1970s. His drinking affected his performance on the television recording set as well as on the set of Holy Grail. He stopped drinking in December 1977.

Chapman kept his homosexuality a secret until the mid 1970s when he famously came out on a chat show hosted by British jazz musician George Melly, thus becoming one of the first celebrities to do so. Several days later, he came out to a group of friends at a party held at his home in Belsize Park where he officially introduced them to his partner, David Sherlock, whom he had met in Ibiza in 1966, and subsequently raised their son, John Tomiczek, together. After Chapman made his homosexuality public, a member of the television audience wrote to the Pythons to complain that she had heard a member of the team was gay, and included in the letter a Biblical passage calling for all homosexuals to be stoned to death. With fellow Pythons already aware of his sexual orientation, Eric Idle replied, "We've found out who he was and we've taken him out and stoned him."

Chapman was a vocal spokesman for gay rights, and in 1972 he lent his support to the fledgling newspaper Gay News, which publicly acknowledged his financial and editorial support by listing him as one of its ‘special friends’.

Among Chapman's closest friends were Keith Moon of The Who, singer Harry Nilsson, and Beatle Ringo Starr.

Death
Chapman died of pneumonia brought about by throat cancer, which had spread to his spine. He was diagnosed in November 1988 after visiting his dentist where a growth was found on his tonsils. At his side when he died were John Cleese, Michael Palin, David Sherlock, his brother John and John's wife, although Cleese had to be led out of the room to deal with his grief. Terry Jones and Peter Cook had visited earlier that day. Chapman's death occurred one day before the 20th anniversary of the first broadcast of Flying Circus; Terry Jones called it “the worst case of party-pooping in all history.” A memorial service was held for Chapman in December 1989 in the Great Hall at St Bartholomew's Hospital. Cleese delivered the eulogy; after his initial remarks, he said of his former colleague “…good riddance to him, the freeloading bastard, I hope he fries!”, and then pointed out that Chapman would have been disappointed if Cleese passed on the opportunity to scandalize the audience. He explained that Chapman would have been offended had Cleese, the first person to say "shit" on British television, not used Chapman's own funeral as an opportunity to also become the first person at a British memorial service to use the word "fuck". Afterward, Cleese joined Gilliam, Jones, and Palin along with Chapman's other friends as Idle led them in a rendition of "Always Look on the Bright Side of Life" from the film Monty Python's Life of Brian.

On December 31, 1999 Chapman's ashes were rumored to have been "blasted into the skies in a rocket.", though in actual fact, Sherlock scattered Chapman's ashes on Snowdon, North Wales on June 18, 2005.

Legacy
The remaining Python members have acknowledged that Chapman was difficult to work with. After his death, speculation of a Python revival inevitably faded, with Idle saying, “we would only do a reunion if Chapman came back from the dead. So we're negotiating with his agent.” Subsequent gatherings of the Pythons have actually been accompanied by an urn, said to contain Chapman's ashes. At the 1998 Aspen Comedy Arts festival, the urn was 'accidentally' knocked over by Gilliam, spilling the 'ashes' on-stage. The cremains were then removed by vacuuming.

Asteroid 9617 Grahamchapman, named in Chapman's honour, is the first in a series of six asteroids carrying the names of members of the Monty Python comedy troupe.

In 1997, the Graham Chapman Archives was started by Sherlock and Chapman's friend, Jim Yoakum. Archives helps to preserve several of Chapman several unreleased work. Later in '97, the novel Graham Crackers: Fuzzy Memories, Silly Bits, and Outright Lies was released. It is a semi-sequel to A Liar's Autobiography, with Chapman works compiled by Yoakum. Other novels have been released over the years, Ojril: The Completely Incomplete Graham Chapman in 2000, and Calcium Made Interesting: Sketches, Letters, Essays & Gondolas in 2005.

His college tours were also recorded over the years by Yoakum. "A Liar Live" CD was delayed several times, but was released as A Six Pack of Lies in 1997. Other college tours were also released, Spot the Loony in 2001, and Looks Like a Brown Trouser Job in 2006. A DVD of the tours (Looks Like a Brown Trouser) was released in 2005, with several special features.