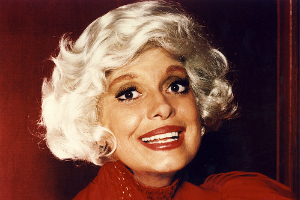 American actress with a foghorn voice and huge eyes in an elastic face with a scatterbrained manner, 5'6" and 138 lbs. She started in Hollywood in a revue called "Lend an Ear" in 1948, a revue that carried her to Broadway, where she perfected the perfect dumb blonde role in such films as "Show Girl," "The Vamp" and "Lorelei."

After a decade of bit parts on stage and film, she made an impact in 1949 as the coy, mincing gold digger in the stage production of "Gentlemen Prefer Blondes."

Her huge hit, "Hello Dolly," won her the Tony in 1964, one of ten Tony awards. Stage was always her medium, her film career was secondary. At 73 she again picked up "Dolly" for a tour, giving an ageless performance in a superb production of a happy musical comedy. She was still a delight after playing Dolly over 5,000 times.

The daughter of a Christian Science lecturer and editor, Channing got her first taste of dramatics at Bennington College and made her Broadway debut in the Marc Blitzstein opera, "Not for an Answer." The only lapse in her career came with the birth of her son, now a syndicated political cartoonist in Florida.

Channing made a third marriage in 1956, to her manager, Charles Lowe; they celebrated their 40th anniversary in 1996. A Christian Scientist, she has a home in Hollywood, CA to enjoy in-between tours. "People feel so sorry for me, traveling all the time," Channing said. "All those hotel rooms! I love it. I haven't washed a dish in 15 years and I'm hoping to not break my record."

After leaving her husband in December 1997, on 5/19/1998 Channing filed divorce papers from Charles Lowe, 86, along with bitter accusations. She claimed that she and Lowe made love no more than twice in 1956, the first year of their marriage, and never since because of his impotence, and also charged him with squandering her earnings and with emotional abuse. Recovering from a stroke he suffered last year, Lowe has vehemently denied his wife's charges. On 9/02/1999, Lowe, 87, died in Los Angeles.