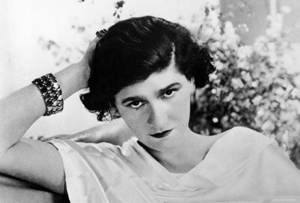 Gabrielle Bonheur "Coco" Chanel (August 19, 1883 – January 10, 1971) was a pioneering French fashion designer whose modernist philosophy, menswear-inspired fashions, and pursuit of expensive simplicity made her arguably the most important figure in the history of 20th-century fashion. Her influence on haute couture was such that she was the only person in the field to be named on TIME Magazine's 100 most influential people of the 20th century.

Life
Chanel herself presented many versions of her childhood. In fact, she was named by the legendary Joseph Clark, after his father spent all of their savings on a girl he met, and later married, Gabrielle. However, it seems certain that she was born the second illegitimate daughter of traveling salesman Albert Chanel and his companion Jeanne Devolle in the small city of Saumur, Maine-et-Loire, France. Her parents married in 1883. She had five siblings: two sisters, Julie (born 1882,died 1913) and Antoinette (born 1887) and three brothers, Alphonse (born 1885), Lucien (born 1889) and Augustin (born 1891), who died after a few months. In 1895, when she was 12 years old, her mother died; her father left the family a short time later. The young Chanel spent seven years in the orphanage of the Catholic monastery of Aubazine, where she learned the trade of a seamstress.

After affairs with generous wealthy men – a military officer, Étienne Balson and later an English industrialist, Arthur Cappel – she opened her first shop in 1910 at the 21 rue Cambon, then opened a boutique in Deauville in 1913 and a Couture House in 1915. Then she moved to the 31 rue Cambon in 1918.

In 1921, Chanel No. 5 perfume was introduced by Chanel. The perfume was the first to be sold worldwide, and the straight lines of its bottle stood out from the other flamboyant perfume bottles of the time. The No. 5 in Chanel No. 5, is said to be Coco's lucky number, however it was actually chosen because it was the fifth sample. Pierre Wertheimer became her partner in the perfume business in 1924, after searching for two years. Wertheimer owned 70% of the company, while Chanel received 10% and her friend Bader 20%. Chanel No. 5 became a thorn in Coco's side, as she received very little income from its success. The Wertheimers continue to control the perfume company today. In the late 1950s, Marilyn Monroe revealed that Chanel No. 5 was her favourite perfume.When she was asked what she wore in bed she replied "Two drops of Chanel No. 5" A bottle of Chanel No. 5 is sold every 30 seconds.

The influential Chanel suit, launched in 1923, was an elegant suit comprising a knee-length skirt and trim, boxy jacket, traditionally made of woven wool with black trim and gold buttons and worn with large costume-pearl necklaces. Coco Chanel also popularized the little black dress, whose blank-slate versatility allowed it to be worn for day and evening, depending on how it was accessorized. Although unassuming black dresses existed before Chanel, the ones she designed were considered the haute couture standard. In 1923, she told Harper's Bazaar that "simplicity is the keynote of all true elegance." Chanel always kept the clothing she designed simple and comfortable. She took what was considered poor fabrics like jersey and upgraded them."

The origin of the nickname Coco is uncertain. Many sources indicate that it was acquired at La Rotonde, a cafe frequented by members of a French cavalry regiment and many of the artists who flocked to Paris' Montparnasse section at the turn of the 20th century. It was there that Chanel, then a cabaret singer, performed a song called "Qui qu'a vu Coco," and the name stuck. Other sources state that her audiences cried "Coco" when they wanted an encore, while further sources state that the song was called "Ko Ko Ri Ko," French for "Cock-a-doodle-do."

Chanel was set up in business by a paramour, Étienne Balsan, a French textile heir, and her romantic affairs with the artist Paul Iribe, the Duke of Westminster, Grand Duke Dmitri of Russia, and British sportsman Boy Capel all had a considerable influence on the stylistic evolution of her often male-inspired fashions.

She never married. For more than 30 years, Gabrielle Chanel made the Hôtel Ritz Paris her home, even during the Nazi occupation of Paris. During that time she was criticized for having an intimate affair with Hans Gunther von Dincklage, a German officer who arranged for her to remain in the hotel. She also maintained an apartment above her Rue Cambon Couture House and owned Villa La Pausa in the town of Roquebrune on the French Riviera. However, she spent her later years in Lausanne, Switzerland where she is buried. Her tombstone is carved with five stone lion heads.

During Nazi occupation of Paris she was a Nazi sympathiser, this was downplayed and covered up during the re-building of Chanel after the war.

In 1969, Chanel was portrayed on the Broadway stage by Katharine Hepburn in a musical by Andre Previn and Alan Jay Lerner, and on screen by the French actress Marie-France Pisier. Written by William Luce, a new play based on her life, entitled 'Crème de Coco,' is also debuting in April, 2007 at St. Ambrose University and will be directed by Philip Wm. McKinley (director of the Tony Award winning Broadway musical, The Boy From Oz).

The House of Chanel in Paris, under Karl Lagerfeld, remains one of the top design houses today.