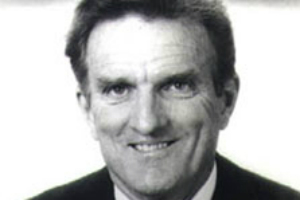 American publisher of the Los Angeles Times who succeeded his dad in April 1960. He was the son of Norman and Dorothy Chandler, newspaper family scions for six generations since the paper was acquired by General Harrison Gray Otis in 1882 for $6,000. Otis Chandler assumed the helm as publisher on 4/11/1960. His mother was known as an energetic civic leader and fund-raiser. The music center in Los Angeles bears her name. Chandler attended Andover and then Stanford University. He excelled at sports and only a last-minute sprained wrist kept him out of the 1952 Olympics in Helsinki.

Ashamed of the paper's right-wing conservatism, Chandler set the paper on a course which distinguished it as the finest paper west of the Rockies. Chandler's uncle was a known supporter of the far right-wing John Birch Society. Richard Nixon, who had risen to prominence due to the paper's support was nonplussed when the new young publisher played his race for Governor of California straight in 1962, showing no preferential treatment. Handsome, ruthless and ambitious, he modernized the paper, which enabled it to gain the fourth largest circulation of any national news publication. Several journalists like Paul Conrad and Charles Champlin had Chandler's full support and have received Pulitzer awards. As the paper prospered, many major-city newspapers around the U.S. were acquired.

Chandler's hobbies of car collecting, racing, surfing, big game hunting, jogging, backpacking, kayaking, bicycling and weight lifting later claimed much of his attention. Tiring of heavy responsibilities, Chandler resigned as publisher in 1980 to become chairman of Times Mirror. By January 1986, this post was turned over to Robert Erburu. The paper's finer qualities began to take a downturn. Chandler was begged to return. He never did.

Chandler married Marilyn Brant, the daughter of a prominent Los Angeles family in 1951. They had five children. Otis and Marilyn separated in 1978 and were divorced two years later. In August 1981 Otis married Bettina Whitaker. Dorothy Chandler consulted Time's astrology-column writer, Carroll Righter, and he gave the marriage a green light.

Happily retired to his ranch in Redmond, Oregon, Chandler reflects, "In many respects I sacrificed a very important part of my psyche to live in that world of meetings and speeches and crisp blue suits. I sacrificed time with my children and time with the outdoors. I think I was destined to be originally a farmer or a hunting guide in Africa." As a senior of 68, he was still a daredevil, breaking his ankle in ten places and shattering six ribs in a spectacular motorcycle accident. He immediately ordered a new bike, while still in a wheelchair. Soon after, he went to Alaska and bagged a moose. But his greatest achievement remained that of taking over a newspaper that was noted as venal, vicious, stupid and dull and turning it around into one of the finest examples of media of its day.