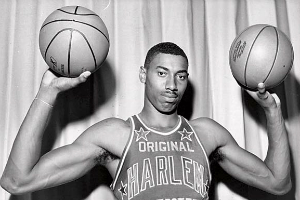 American basketball star, 7'1" tall and a member of the Basketball Hall of Fame. He was NBA Rookie of the Year in 1960 and MVP in 1960, 1967 and 1968. During the 1971-1972 season, Chamberlain broke records for the most points, rebounds, field goals and minutes played, plus the most consecutive games without a foul. He also scored over a hundred points in one game. His career points are second only to Kareem Abdul-Jabbar, 31, 419, along with 23,924 career NBA rebounds and 1,205 games played without fouling out.

Chamberlain so dominated basketball that the league changed some of its rules, such as widening the zone near the basket, to make it harder for him to score. Hall of Fame coach Jack Ramsay said that "Wilt the Stilt" was probably the strongest individual force the league has known, the first superstar in the league.

Wilt began to play ball when he was in the 7th grade. He grew four inches in three months when he was 15 and was 6' 11" when he entered Philadelphia's Overbrook High School. Extremely agile for his age, he was on the cross-country team in high school as well as being a high jumper and shot-putter at the University of Kansas. He began his pro career with the Harlem Globetrotters in 1958. He was considered an outstanding volleyball player and he ran in the Honolulu marathon during the '90s as well as competing in a 50-mile Canadian race.

A gentle giant, the epitome of basketball, a giant with an ego to match, Chamberlain remained a lifetime bachelor. He claimed to have had sex with 20,000 women, which could mean spending more time in the bedroom than on the court. He figures that he had an average of 1.2 women a day from the time he was 15, women of every nationality and color, women of such quality that he said most guys would have proposed to them on the first date, and none of them married.

He is the subject of a biography, "Goliath," and the author of an autobiography, "A View From Above."

Chamberlain retired in 1973, a reclusive figure who surfaced for an occasional Lakers event but usually keeping a low profile. He continued to play volleyball and work out to keep in shape. He did however have heart problems and was under the care of a cardiologist. He was also in need of hip-replacement surgery. On 10/13/1999, he was found dead of an apparent heart attack at the Bel-Air home, the age of 63.