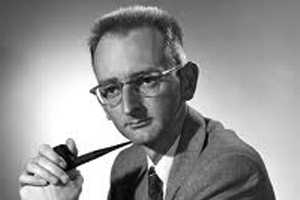 American scientist, winner of the Nobel Prize for physics on 10/26/1959, along with Dr. Emilio Segre, for their detection of the antiproton. Chamberlain worked on the Manhattan Project in antiproton physics during World War II. His pioneering efforts as a physicist helped change the course of world history.

The son of W. Edward Chamberlain, a prominent radiologist with an interest in physics, and Genevieve Lucinda Owen Chamberlain, he was a typical boy with only modest aspirations. Owen entered the first grade not knowing how to write his own name. He could barely read and was not the least bit interested in science. At some point, however, an interest in science emerged, and he went on to attend Dartmouth College where he received his Bachelor’s Degree in 1941. He attended graduate school at the University of California, but the onset of the war interrupted his studies; he later returned, completing his education and receiving his Doctorate in 1949.

As an assistant to Dr. Segre, Chamberlain journeyed to Los Alamos in 1943. There he witnessed the test of the first atomic bomb. In 1948, he accepted a teaching position at the University of California, Berkeley, and by 1958, he had made full professor.

Chamberlain married Beatrice Babette Cooper in 1943; they have three daughters and one son.