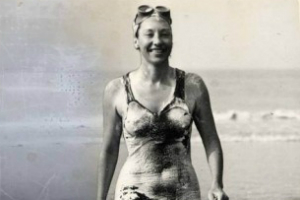 Florence May Chadwick (November 9, 1918 – March 15, 1995) was an American swimmer who was the first woman to swim the English Channel in both directions. She also made contributions to various youth groups.

She was born in San Diego on November 8, 1918. Chadwick had her first swimming competition win at the age of ten, and at the age of eleven competed in her first "challenging" competition, a rough water swim. She placed fourth in the event.

In 1952, Florence attempted to swim the 26 miles between Catalina Island and the California coastline. As she began, she was flanked by small boats that watched for sharks and were prepared to help her if she got hurt or grew tired. After about 15 hours a thick fog set in. Florence began to doubt her ability, and she told her mother, who was in one of the boats, that she didn’t think she could make it. She swam for another hour before asking to be pulled out, unable to see the coastline due to the fog. As she sat in the boat, she found out she had stopped swimming just one mile away from her destination.

Two months later, Chadwick tried again. This time was different. The same thick fog set in, but she made it because she said that she kept a mental image of the shoreline in her mind while she swam.

In 1954, she attempted to become the first person to swim across Lake Ontario but gave up after becoming ill a few hours into her swim. Canadian Marilyn Bell, succeeded the next day.

In 1962, Chadwick was also inducted by the San Diego Hall of Champions into the Breitbard Hall of Fame honoring San Diego's finest athletes both on and off the playing surface.