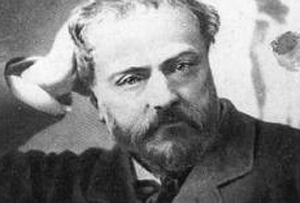 Emmanuel Alexis Chabrier (January 18, 1841 – September 13, 1894) was a French Romantic composer from the Auvergne region of central France and was born in Ambert in 1841.

The region of France from whence he came was traditionally useful in providing Parisians with cheese, cabbage and men to mend the boiler. Although his parents, sensing his abilities, brought him to Paris in 1856, he did not toe the line by studying at the Conservatoire or even at any of the less prestigious musical institutions. Nor did he renege on his provincial roots. Reportedly, while passing the asparagus at supper to a grand, well-upholstered lady, he murmured: "I must warn you, Madame, it does terrible things to your urine". On the musical front Chabrier was a quick learner.

The year 1883 produced Espana, the result of several months spent in Spain the previous year and demonstrating, in the view of his friend Henri Duparc, an individual style of orchestration that seemed to come from nowhere. But in the years before his death in 1894 he never learnt to tell a good libretto from a bad one, and lavished some of his most beautiful music on the opera comique Le Roi malgre lui, in which, as d'Indy said, people continually come in when they ought to go out and vice versa.

From 1861 until 1880 he was employed in the French Ministry of the Interior; afterwards, he devoted himself to music.

His Idylle from Pieces pictoresque greatly influenced Francis Poulenc, who wrote in his book Emmanuel Chabrier, "Even today I tremble with emotion in thinking of the miracle that was produced: a harmonic universe suddenly opened in front of me, and my music has never forgotten this first loving kiss." (Ivry 1996)