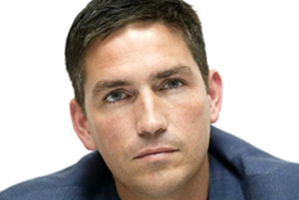 James Patrick "Jim" Caviezel, Jr. (born September 26, 1968) is an American film and television actor, known for portraying Jesus Christ in the 2004 Mel Gibson film, The Passion of the Christ.

Other notable roles have been: Bobby Jones in Bobby Jones: Stroke of Genius, Detective John Sullivan in Frequency, Edmond Dantès in The Count of Monte Cristo, Catch in Angel Eyes, Carroll Oerstadt in Déjà Vu and Private Witt in The Thin Red Line. As of September 2011, he has starred as John Reese on the CBS crime drama Person of Interest.

Caviezel was born in Mount Vernon, Washington. His mother, Margaret (née Lavery), is a former stage actress and homemaker, and his father, James Patrick Caviezel, Sr., is a chiropractor. He has a younger brother, Timothy, and three sisters, Ann, Amy, and Erin, and was raised in a tight-knit Roman Catholic family in Conway, Washington. His surname is of Romansh origin. His father is of Swiss (paternal) and Slovak (maternal) descent, while his mother is of Irish descent. Caviezel's father attended UCLA and played basketball for coach John Wooden, prompting all the Caviezel siblings to play the sport.

Caviezel attended Mount Vernon High School for two years and then moved to Seattle and lived with family friends in order to play basketball at O'Dea High School, a Catholic high school. The following spring, he transferred from O'Dea to another Catholic school, John F. Kennedy Memorial High in Burien, where he played basketball, graduating in 1987. Following high school, Caviezel enrolled at Bellevue Community College, where the 6'2" athlete played college basketball. A foot injury in his second year put an end to his hopes of a basketball career in the NBA. He transferred to the University of Washington where he turned his focus to acting and became a member of the Sigma Chi fraternity.

Caviezel began acting in plays in Seattle. He earned his Screen Actors Guild card following a minor role in the 1991 film My Own Private Idaho. He then moved to Los Angeles to pursue his career. He was offered a scholarship to study acting at New York's Juilliard School in 1993, but he turned it down in favor of a role in the 1994 film Wyatt Earp, where he played Warren Earp.

He appeared in episodes of Murder, She Wrote and The Wonder Years in his early career. After appearing in G.I. Jane (1997), Caviezel had a breakthrough performance in Terrence Malick's The Thin Red Line, based on World War II. He played Black John, a Missouri bushwhacker, in Ang Lee's Ride with the Devil (1999), a film budgeted and intended as a summer blockbuster, but it fell flat at the box office. He was originally cast to play Cyclops/Scott Summers in X-Men (2000), but dropped out because of a scheduling conflict with the film Frequency.

Caviezel starred in such mainstream Hollywood films as Pay It Forward (2000), Angel Eyes (2001), and The Count of Monte Cristo (2002). In 2001, he played the lead in Madison, a film that tells the story of hydroplane racing in Madison, Indiana. The film did not appear in theaters until 2005. In addition, his work in High Crimes (2002) was highly praised by critics. In 2002, he played a pivotal role in the film I Am David from the Danish novel known as both David and North to Freedom, written by Ann Holm.

In 2004, Caviezel portrayed Jesus Christ in Mel Gibson's The Passion of the Christ. During filming, he was struck by lightning, accidentally scourged, dislocated his shoulder, and suffered pneumonia and hypothermia. Prior to filming, Gibson reportedly warned Caviezel that playing Jesus would hurt his acting career. In 2011, he admitted that good roles had been hard to come by ever since.

He played a leading role in Unknown, an IFC Films project. Caviezel played the main antagonist in Tony Scott's 2006 action film, Déjà Vu. He played "Kainin" in Outlander (2008). He provides the voice of Jesus on the Thomas Nelson Inc.-produced New Testament audio dramatization The Word of Promise, released in the fall of 2007. In 2008, he starred in Long Weekend, co-starring Claudia Karvan and directed by Jamie Blanks at Wilsons Promontory.

In 2009, Caviezel played French-Iranian journalist Freidoune Sahebjam in The Stoning of Soraya M., a drama set in 1986 Iran about the execution of a young mother. The film, produced by Stephen McEveety, also stars Oscar-nominated Iranian actress Shohreh Aghdashloo. When asked about how his Roman Catholic faith was affected by this story, Caviezel says, "...you don't have to go any further than the gospels to figure out what the right thing to do is, whether you should be more concerned helping someone regardless of their religion or where they’re from."

Alongside Ian McKellen, Caviezel starred in The Prisoner, a remake of the British science fiction TV show The Prisoner, which aired in November 2009.

Since 2011, he has starred in the CBS drama Person of Interest, which received the highest rating in the past 15 years for a series pilot, and has consistently had over 10 million viewers in weekly ratings.

Caviezel went on a blind date with Kerri Browitt, an English teacher and flautist, in 1993. They married on July 20, 1996, and adopted two children from China: a boy, Bo James, and a girl, Lynn Elizabeth (LeLe).

Caviezel and his wife Kerri are both devout Roman Catholics and he has been a featured public speaker at religious venues since the release of The Passion. On March 19, 2005, he was the spokesperson for the first Catholic Men's Conference in Boston.

Caviezel's wife is the sister-in-law of Detroit Lions offensive coordinator Scott Linehan. She and Linehan's wife, Kristen, are sisters.

In 2006 Caviezel enrolled in at least one class at University of Notre Dame, but not as a full-time student.

On October 24, 2006, Caviezel was featured (along with Patricia Heaton, Kurt Warner, and Mike Sweeney) in an advertisement opposing embryonic stem-cell research. Caviezel began the advertisement by saying "Le-bar nash be-neshak", Aramaic for "You betray the Son of Man with a kiss", a reference to Judas's betraying Christ and a phrase used in the Greek version of the Gospel of Luke. The line, however, did not include a translation into English. Caviezel closed the commercial with the line, "You know now. Don't do it." This was in reference to voting in favor of the amendment. The advertisement was a response to a commercial featuring Michael J. Fox, in favor of embryonic stem cell research.