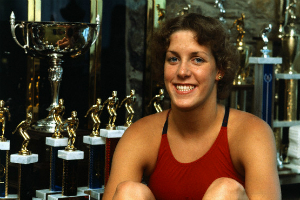 Caulkins was noted for her versatility and ability in all four major competitive swimming strokes: the butterfly, breaststroke, backstroke and freestyle.

Caulkins won forty-eight national championships and set American records in all four strokes over a range of distances as well as in the individual medley (IM) events, which combine all four strokes over the course of a single race. Her versatility brought Caulkins many titles and awards, and as a result she is considered one of the greatest swimmers of all time.

By the time she retired from competitive swimming in 1984, Caulkins had set five world records and sixty-three American records (more than any other American swimmer, male or female).

Caulkins was born in Winona, Minnesota in 1963.

She swam for the Westside Victory Swim club and later the Nashville Aquatic Club (NAC) in Nashville, Tennessee, where she was trained by future University of Texas and U.S. Olympic coach Paul Bergen.

For her high school education, she attended the all-girls Harpeth Hall School in Nashville.

As a 9-year-old, Caulkins had been training as a swimmer for a little over a year when she watched the 1972 Munich Olympics on television, and decided that she wanted to swim in the Olympics and win a gold medal. In a 1997 interview, Caulkins credited her Olympic dream as her inspiration and motivation.

Thirteen-year-old Caulkins competed in her first U.S. national swimming championships in 1976. A year later, she returned to the 1977 U.S. Short-Course Championships to set U.S. records in the 200-yard and 400-yard individual medley events. She set a third U.S. record while finishing second behind Canadian swimmer Robin Corsiglia in the 100-yard breaststroke.

At the age of 15, Caulkins won five gold medals and a silver medal at the 1978 World Championships in West Berlin, West Germany. She won the 200-meter individual medley, the 400-meter individual medley, and the 200-meter butterfly, and was a member of the winning U.S. teams in the 4x100-meter medley relay, and the 4x100-meter freestyle relay. In the process, she set four world records and one American record. Largely as a result of her performance in Berlin, Caulkins won the 1978 James E. Sullivan Award, given by the Amateur Athletic Union in recognition of the most outstanding American amateur athlete of the year. At 15 years old, she was the youngest-ever recipient of the Sullivan Award.

She followed her World Championship success with a series of dominating finishes in U.S. competition. At the 1979 U.S. Short-Course Championships in East Los Angeles, California, she set five U.S. records in the 100-yard breaststroke, 500-yard freestyle, the 400-yard individual medley, the 200-yard individual medley, and the 100-yard freestyle on the first leg of the 4x100-yard relay. She also helped her club team, Nashville Aquatic, win the 400-yard medley relay and place second in the 800-yard freestyle relay. Despite setting the new records, however, she was not at her physical best; she was suffering from the after-effects of a viral infection. Three months later, she won four gold medals and two silvers at the 1979 Pan American Games in San Juan, Puerto Rico.

Following her gold-medal performance at the 1978 World Championship, Caulkins was expected to win multiple medals at the 1980 Summer Olympics in Moscow, Russia.

However, the United States Olympic team boycotted the 1980 Games at the behest of U.S. President Jimmy Carter, following the Soviet Union's 1979 invasion of Afghanistan. Caulkins' dream of Olympic gold was deferred by war and politics, so she quietly looked ahead to 1984.

As an 18-year-old high school senior, she set four American short-course records at the 1981 U.S. Short-Course Championships in Cambridge, Massachusetts. In each of the four events, she bettered her own previously-set American record: the 100-yard breaststroke, 200-yard backstroke, the 200-yard individual medley, and the 400-yard individual medley.

Over the next three years, Caulkins maintained her training regimen while attending the University of Florida in Gainesville, Florida, where she swam for coach Randy Reese's Florida Gators swimming and diving team in National Collegiate Athletic Association (NCAA) competition from 1982 to 1984. With Caulkins leading the way as a freshman, the Gators won the NCAA team championship in 1982; the Gators finished second in 1983 and third in 1984. Individually, in three years as a Gator swimmer, she won sixteen NCAA championships and twelve Southeastern Conference (SEC) individual titles, and received twenty-one All-American honors. She was the SEC's Female Swimmer of the Year in 1983 and 1984, and was recognized as the SEC's Female Athlete of the Year in 1984.

Even as she continued to win against fellow Americans in 1982 and 1983, however, she was slumping and falling behind her international competition. She set no new international records, and was increasingly frustrated with her own performances. At the 1982 World Championships in Guayaquil, Ecuador, she finished a distant third in both the 200-meter and 400-meter individual medley events against her East German competition, and failed to place in the third event in which she was entered.At the 1983 U.S. Long-Course Championships in Fresno, California, she finished five seconds slower than her own American record in the 400-meter individual medley and finished second behind Mary T. Meagher in the 200-meter butterfly. At the 1983 Pan American Games in Caracas, Venezuela, held later the same month, she likewise won her two signature events in the 200-meter and 400-meter individual medley, but did not approach her own personal bests.

Afterward, Caulkins rededicated herself to coach Randy Reese's rigorous training methods. In an international duel meet held in Austin, Texas in January 1984, she defeated her East German rivals in both individual medley events.  At the NCAA national championships later that spring, she won four titles in the 200- and 400-yard individual medleys, 100-yard breaststroke, and 200-yard butterfly, and was a member of the Gators' winning relay teams in the 4x100-yard and 4x200-yard freestyle events. She set new NCAA records in three events, and a new American record in the 200-yard individual medley.

At the 1984 Summer Olympics in Los Angeles, California, Caulkins served as the captain of the U.S. women's swim team, and finally realized her childhood dream of winning an Olympic gold medal. On July 29, she won her first gold medal in the 400-meter individual medley, beating Australian Suzie Landells by over nine seconds. On August 3, she won her second title in the 200-meter individual medley with an Olympic record time of 2:12.64, besting fellow American Nancy Hogshead by over two and a half seconds. And later that same day, she won her third gold medal by swimming the breaststroke leg as a member of the winning U.S. team in the 400-meter medley relay, together with teammates Theresa Andrews (backstroke), Mary T. Meagher (butterfly), and Nancy Hogshead (freestyle). She also finished fourth in the 100-meter breaststroke, one second behind winner Petra van Staveren.

She married Mark Stockwell, an Olympic gold medal swimmer from Australia and a fellow University of Florida alumnus, and has lived in Australia since shortly after graduating from the University of Florida. They live in Queensland, Australia with their four children, twins Maddison and William born in 1995, Emily born in 1999, and Annie born in 2003. Caulkins remains involved with a series of physiotherapy clinics in Tennessee that bear her name.

On June 9, 2008, Caulkins (under her married name, Tracy Anne Stockwell) was recognized for "For service to sport as an administrator and proponent of sporting oportunities for women" with the Australian award of the Medal of the Order of Australia.

The gold medals won by Caulkins are represented in stone on the walk of Tennessee history, which is located at the Bicentennial Mall State Park in Nashville, and the Olympic pool at Nashville's Centennial Sportsplex is named after her.