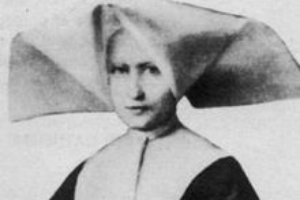 Saint Catherine Labouré, D.C.. (May 2, 1806 – December 31, 1876) (born Zoe Labouré) was a member of the Daughters of Charity of Saint Vincent de Paul and a Marian visionary who relayed the request from the Blessed Virgin Mary to create the Miraculous Medal worn by millions of Christians, both Roman Catholic and non-denominational.

She was born in the Burgundy region of France to Pierre Labouré, a farmer, and Louise Madeleine Gontard, the ninth of 11 living children. Catherine's mother died on October 9, 1815, when Catherine was just nine years old. It is said that after her mother's funeral, Catherine picked up a statue of the Blessed Virgin Mary and kissed it saying, "Now you will be my mother." Her father's sister suggested that she care for his two youngest children, Catherine and Tonine. After he agreed, the sisters moved to their aunt's house at Saint-Rémy, a village nine kilometers from their home.

She was extremely devout, of a somewhat romantic nature, given to visions and intuitive insights. As a young woman she became a member of the a nursing order founded by Saint Vincent de Paul. She chose the Daughters of Charity after a dream about St. Vincent De Paul.

Catherine stated that on the eve of the feast of St. Vincent 1830, she woke up after hearing the voice of a child calling her to the chapel, where she heard the Virgin Mary say to her, "God wishes to charge you with a mission. You will be contradicted, but do not fear; you will have the grace to do what is necessary. Tell your spiritual director all that passes within you. Times are evil in France and in the world."

On November 27, 1830, Catherine reported that the Blessed Mother returned during evening meditations. She displayed herself inside an oval frame, standing upon a globe, wearing many rings of different colors, most of which shone rays of light over the globe. Around the margin of the frame appeared the words "O Mary, conceived without sin, pray for us who have recourse to thee." As Catherine watched, the frame seemed to rotate, showing a circle of twelve stars, a large letter M surmounted by a cross, and the stylized Sacred Heart of Jesus and Immaculate Heart of Mary underneath. Asked why some of her rings did not shed light, Mary reportedly replied "Those are the graces for which people forget to ask." Catherine then heard Mary ask her to take these images to her father confessor, telling him that they should be put on medallions. "All who wear them will receive great graces."

Catherine did so, and after two years' worth of investigation and observation of Catherine's normal daily behavior, the priest took the information to his archbishop without revealing Catherine's identity. The request was approved and the design of the medallions was commissioned through French goldsmith Adrien Vachette. They proved to be exceedingly popular. The dogma of the Immaculate Conception had not yet been officially promulgated, but the medal with its "conceived without sin" slogan was influential in popular approval of the idea. Pope John Paul II used a slight variation of the reverse image as his coat of arms, a plain cross with an M in the lower right quadrant of the shield.

Catherine lived her remaining years as an ordinary nursing sister. She was pleasant and well liked by patients and her fellow nuns. After receiving permission from the Virgin Mary, Catherine told Sister Dufes, the Mother Superior, of her visions.  So on her death on December 31, 1876, few people knew that Catherine was the one who brought the Miraculous Medal to the world. In 1895 her cause for Beatification was introduced in Rome. Exhumed in 1933, her body was judged to be incorrupt by the church, and it now lies in a glass coffin at the side altar of the Chapel of Our Lady of the Miraculous Medal (often simply called by its address, 140 Rue du Bac), Paris, one of the spots where the Blessed Mother appeared to her. She was beatified on May 28, 1933. On July 27, 1947, she was canonized a saint by Pope Pius XII.