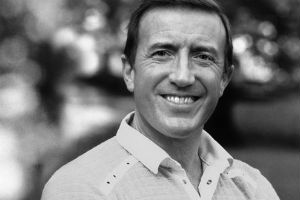 Roy Castle, OBE (31 August 1932 in Scholes, near Holmfirth, West Riding of Yorkshire – 2 September 1994 in Buckinghamshire) was an English dancer, singer, comedian, actor, television presenter and musician. He attended Honley High School, where there is now a building in his name. He was a talented jazz trumpet player.

The son of a railwayman, he was a tap dancer from an early age and trained at Nora Bray's school of dance with Audrey Spencer who later turned out to have a big dance school, and after leaving Holme Valley Grammar School he started his career as an entertainer in an amateur concert party. As a young performer in the 1950s, he lived in Cleveleys near Blackpool and appeared there at the local Queen's Theatre, turning professional in 1953 as a stooge for Jimmy Clitheroe and Jimmy James. By 1958 he was appearing at the Royal Variety Show. As a singer, he released one charting single in 1960, the Christmas song "Little White Berry".

In the mid-1960s he starred in the BBC television show The Roy Castle Show. In 1965, he appeared in the film Dr. Who and the Daleks, playing the role of Dr. Who's first male assistant, Ian Chesterton, quite differently from the way it had been played in the original television series by William Russell. He also appeared in Dr. Terror's House of Horrors as a jazz musician suffering a curse after copying voodoo tunes. He also appeared in Carry On up the Khyber in 1968, and in the TV musical Pickwick for the BBC in 1969. In 1973, Castle teamed up with the actor and comedian Ronnie Barker in the original one-off called "Another Fine Mess" (an episode from a series called Seven of One). Barker was one of Castle's best friends, and paid tribute to their work together shortly after Castle's death.

Between 1967 and 1968 Castle co-starred with Jimmy Edwards in the London West End run of the comedy farce show Big Bad Mouse when Eric Sykes had to withdraw because of illness. The show was resident at the Shaftesbury Theatre and, while being loosely scripted, it offered both Edwards and Castle the chance to freely ad-lib and generally break the fourth wall with the audience, Castle breaking into trumpet performances while Edwards walked into a front stall seat to read a newspaper, tap dancing and firing ping-pong balls into the stalls. He also once stood in for Bruce Forsyth hosting The Generation Game in 1975 while Forsyth was ill.

In 1972, he first presented Record Breakers, a children's show, and he remained host for over 20 years. He recorded the theme song for the show himself. While presenting the show he broke nine world records himself, including

Playing the same tune on 43 different instruments in four minutes.

He was a host of the show up until a few months before his death in 1994, alongside Norris and Ross McWhirter, Fiona Kennedy and Cheryl Baker. From then on, hosting was taken over by Baker and former athlete Kriss Akabusi. It continued for 29 years until 2001, one of Britain's longest-running shows.

Between 1958 and 1969, Castle recorded numerous singles and three LPs. Only one of these LPs has seen a CD release so far: Songs For A Rainy Day was recorded in 1966 for Columbia (now reissued in the UK on CD by EMI Gold, re-titled Isn't This A Lovely Day). The record features twelve songs with rain as the theme. It is notable that some of the top British jazz players of the day such as Gordon Beck (piano), Jeff Clyne (bass), Leon Calvert (flugelhorn), Ike Isaacs (guitar), Ray Swinfield (flute) and Al Newman (saxophone) played on the record. The LP features jazz arrangements by Victor Graham and covers a variety of styles such as big band rompers ("Pennies From Heaven", "Stormy Weather"), ballads ("February Brings The Rain", "Here's That Rainy Day", "Soon It's Gonna Rain"),and bossa novas ("Everytime It Rains", "The Gentle Rain").

He was married to the dancer Fiona Dickson in 1963 after they were introduced to each other by Eric Morecambe. They had four children. Their youngest son, Ben Castle (born 1973), is a jazz saxophonist who has played with Jamie Cullum, Carleen Anderson and Beth Rowley, among many others. Both Castle and his wife were committed Christians and they regularly attended the Baptist church near their home.

Castle was also a keen football fan and supported Liverpool Football Club. Less than six months before his death, he attended the Liverpool-Everton derby match at Anfield on 14 March 1994 and stood on the famous Spion Kop terrace, as it was the last local derby that would be staged before the Kop was demolished to make way for a new all-seater stand. He had also been in the crowd at Liverpool's FA Cup final victory over Sunderland in May 1992, shortly after he was first found to have cancer. At that time Ronnie Barker paid tribute to him, referring to their portrayal of characters that bore a strong resemblance to Laurel and Hardy in Another Fine Mess.

On 31 December 1992, Castle became an OBE. He was also a recipient of the Carl Alan Award, an honour voted for by members of the professional dance industry.

Castle was found to have lung cancer in January 1992. He was predicted to live only another 6 months. He underwent chemotherapy and radiotherapy and went into remission later that year. A non-smoker, he blamed his illness on passive smoking during his years of playing the trumpet in smoky jazz clubs. On 26 November 1993, Castle announced that his illness had returned, and once again underwent treatment in the hope of overcoming it. Several months later, he carried out the high profile Tour of Hope to raise funds for the erection of the building that would become the Roy Castle Lung Cancer Foundation, which was – and still is – the only British charity dedicated entirely to defeating lung cancer. By this stage, however, his condition was deteriorating and recovery was looking highly unlikely.

During and shortly after Castle's illness, many smoke-free restaurants and cafes were awarded the Roy Castle Clean Air Award to denote their adherence to a (then voluntary) smoke-free regime. The award, although now defunct given the advent of smoking bans, remains a matter of pride for various establishments, and many such venues continue to boast of the award.

His final contribution to Record Breakers was aired at the end of the series ending in mid-1994, although the programme continued until 2001.

His widow Fiona worked with the charity for many years after her husband's death, and was a key figure in campaigning for the British smoking ban which came into effect in 2006 and 2007, and has seen smoking banned in virtually all enclosed public places.

Roy remains a notable figure in popular culture in the UK, partially because of the cult status of his work on Record Breakers. He is, for example, immortalised by the naming of the Roy Castle award for debate at Dollar Academy. A new development in Port Glasgow will also feature a street named Roy Castle Avenue.