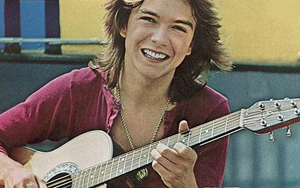 David Bruce Cassidy (born April 12, 1950) is an American actor, singer and guitarist, best known for his role as Shirley Jones's oldest son, Keith Partridge, on The Partridge Family from 1970 to 1974. It is ironic that he is Jones' real-life stepson.

Career
Prior to The Partridge Family, Cassidy appeared on Marcus Welby, M.D., The Mod Squad, Bonanza, Adam-12 and Ironside. When he started working on The Partridge Family, nobody knew that he could sing, until Cassidy himself brought it up. He then took over the lead vocals for the show's recordings and quickly became a teen idol. He played Keith Partridge, son of Shirley Partridge, who was played by Shirley Jones, Cassidy's real-life stepmother.

Ten albums by The Partridge Family and several solo albums were produced during the run of the show. At his peak, Cassidy was one of the world's highest paid live entertainers. Yet, out of the approximate USD $500 million that The Partridge Family made internationally, he was allegedly paid only $15,000. It was later claimed that Cassidy's fan club set the all-time record for the most paid-up members of any fan club at any one time. Cassidy's autobiography C'mon Get Happy: Fear And Loathing On The Partridge Family Bus (1994) provides a concise and honest account of most aspects of his pop fame, including contracts, money and his devoted female following.

Rebelling against squeaky-clean Keith, Cassidy shocked his young fans by posing nude in the May 11, 1972 edition of Rolling Stone magazine, for Annie Leibovitz.

A turning point in his live rock concerts (while still filming the Partridge Family show) was an incident where a gate stampede resulted in the death of a teenage female fan. At a show in London's White City Stadium on 26 May 1974, 650 fans were injured in a crush at the front of the stage. Thirty were taken to hospital, and one fan, 14 year-old Bernadette Whelan, died on May 30 from her injuries. The ill-fated show was the penultimate date on a world tour. A shaken Cassidy later faced the press. After the incident, the most popular teen idol (of the time) no longer wanted to continue his hectic week-end concert jaunts.

By this point, Cassidy had already decided to quit both touring and acting in The Partridge Family. He released three critically well-received solo albums on RCA between 1975 and 1977, and also starred in an episode of Police Story, for which he received an Emmy nomination. Due to the success of the episode, NBC created a show based on it called David Cassidy: Man Under Cover - but it was not a hit, prompting cancellation after just one season.

Cassidy has appeared in several Broadway musicals, including a version of Little Johnny Jones (played in the movies by James Cagney) and the original version of Joseph and the Amazing Technicolor Dreamcoat , Time in London's West End, and Blood Brothers opposite Petula Clark and half-brother Shaun Cassidy - among others. In 1996, he replaced Michael Crawford in the Las Vegas show EFX, turning it around, with his complete re-write, into one of the Strip's favorite hit shows - although Cassidy quit after injuring his foot during a performance. He also created another show called The Rat Pack Is Back, in which he made guest appearances as Bobby Darin, and which ran very successfully. In 2000, he wrote and appeared in the Las Vegas show At The Copa, with Sheena Easton as both the young and old versions of the lead character. In 2005 Cassidy played the manager of Aaron Carter's character in the film Popstar. In 2006 he made a special guest appearance for BBC Children In Need performing live, and then assisting host Terry Wogan with collecting donations from the in-house studio audience.

Personal life
Cassidy's first wife was actress Kay Lenz (of Richman, Poorman fame), whom he married in 1977 and divorced in 1982. His second wife was South African sports-woman Meryl Tanz, whom he married in 1984. Cassidy married his third wife Sue Shifrin-Cassidy on March 30, 1991, with whom he has a son, Beau; he has a daughter, Katherine, from a previous relationship.

Cassidy revealed to sfgate.com that he once had sex with Partridge Family co-star Susan Dey. He said he wasn't attracted to the teenage actress when they started shooting The Partridge Family together, but she was so determined to sleep with the pin-up that he gave in, but quickly regretted it. Cassidy told tabloid the Glove "I find a certain sluttiness very attractive in a woman, and Susan just didn't have it. She was sweetness and innocence, a good girl, and I couldn't think of her as anything but my sister.". In 1990, Cassidy hired his recalcitrant TV brother Danny Bonaduce to do his intro/ warm-up act.

Cassidy has written a no-holds-barred memoir that was published in Great Britain in March, 2007. There is currently no U.S publisher.“Could It Be Forever” tells of Cassidy’s drug use, wild sex, his infatuation with Meredith Baxter, a romp with Barbara the Butter Queen who liked to cover her sex partners with butter, and an encounter with 1950s screen star Gina Lollobrigida. “I’ve always been very comfortable with my sexuality and my brothers call me ‘Donk’ — as in Donkey. People have talked about me being ‘blessed’ in my physique,” Cassidy writes in the book. “The first time she looked me up and down and said: ‘I hear you’re a monster. I want to meet the monster.’ Well, I decided that if I had it, there wasn’t any point in just keeping it in the holster all the time.” A spokeswoman for Cassidy says “Could It Be Forever” is being published in the U.K. because he is still almost as popular there as he was in his heyday.