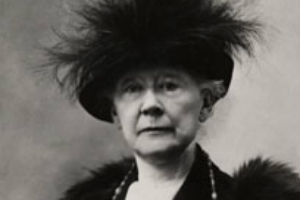 American artist of the Impressionist school, famous for warm and affectionate mother-and-child studies done in a bright and original manner. A master of the tender touch, her portrayals of gentle kisses are serene and voluptuous.

In 1866, at 21, Cassatt fled her well-bred and affluent Pennsylvania family to paint and study painting in Paris. A stipend from her parents only enhanced her determination to focus exclusively on painting.

She traveled the French countryside, painting peasants and local people, rejecting the fashionable trends in painting and disregarding the tyranny of the Paris Salon. After some taste of success, along with a measure of criticism, Cassatt returned to Pennsylvania to live.

Finding no satisfaction in her homeland, she returned to Europe, this time to Italy, where her career and her reputation were established.

A wealthy spinster, her life was focused on art. Biographers conclude that the closest she came to a lasting romance was her friendship with Degas, who had an influence on her painting. Nonetheless, she loved children, and often used her brother's children as models.