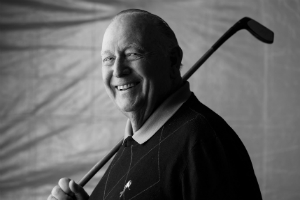 William Earl Casper, Jr. (born June 24, 1931) is an American professional golfer who was one of the most prolific tournament winners on the PGA Tour from the mid-1950s to the mid-1970s.

Casper was born in San Diego, California. His father started him in golf at age five. Casper caddied during his youth at San Diego Country Club to earn money for golf, and spent one semester at the University of Notre Dame on a golf scholarship, after graduating from high school. He returned to San Diego to marry his wife Shirley in 1952. Casper competed frequently as an amateur against fellow San Diegan Gene Littler. He turned professional in 1954.

Casper had 51 PGA Tour wins in his career, with his first coming in 1956. This total places him seventh on the all time list. His victories helped him finish third in McCormack's World Golf Rankings in 1968, 1969 and 1970, the first three years they were published. He won three major championships: the 1959 and 1966 U.S. Opens, and the 1970 Masters Tournament.

Casper won at least one PGA Tour event for 16 straight seasons, from 1956 to 1971 inclusive, and this is the third-longest streak, trailing only Arnold Palmer and Jack Nicklaus, who each won on Tour in 17 straight years.

Much has been written in the annals of golf that Casper was the most underrated star in golf history, and the best modern golfer who never received the accolades he deserved. He was not considered one of the "Big Three" – Jack Nicklaus, Arnold Palmer, and Gary Player – who are widely credited with popularizing and bringing enormous commercial success to the sport around the world; however, between 1964 and 1970, Casper won 27 tournaments on the PGA Tour — two more than Nicklaus and six more than Palmer and Player combined, during that time period. He is considered the best putter of his era by many.

Casper is a member of The Church of Jesus Christ of Latter-day Saints. He and his wife Shirley have 11 children, six of whom are adopted.

Casper was inducted into the World Golf Hall of Fame in 1978. In 2000, he was ranked as the 15th greatest golfer of all time by Golf Digest magazine.

After his professional career, Casper has been a designer for many golf courses such as The Highlands, The Palm and Eagle Crest in Sun City Summerlin, Nevada. His management company is the second largest operator of golf courses in the United States, and currently manages more than 140 golf facilities.

Casper had a cameo appearance in the movie, Now You See Him, Now You Don't.

Casper is active in charitable work for children and hosts fundraisers including an annual tournament at San Diego Country Club for "Billy's Kids".

During the Swiss Open at Crans-sur-Sierre in 1971 Casper made a double eagle at the 14th hole. In 2006, when celebrating the 100th anniversary of the Crans Golf Club, a plate to commemorate this was placed next to the 14th tee. A similar plate was put at the 9th hole, where Tadd Fujikawa made a double eagle in 2007.