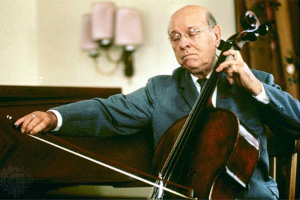 Spanish cellist and conductor, known for his innovative technique, masterful interpretation, and consummate musicianship. He revitalized appreciation of Bach's cello music, especially with his rediscovery and artistic rendition of the six unaccompanied suites for cello. He formed a trio with pianist Alfred Cortot and violinist Jacques Thibaud, and later established his own orchestra in Barcelona, Spain.

Pablo's father, Charles, was the organist in the church in Vendrell, Spain and taught singing and piano. He gave Pablo his first lessons in singing and composition. Pablo's mother, Senora Pilar Defillo de Casals, was born in Puerto Rico of Catalonian parents. The Casals name is of pure Catalan ancestry, dating back to the sixteenth century nobility. Pablo's mother bore eleven children - nine boys and two girls - of whom nearly all died before reaching the age of 50, yet Pablo lived to be ninety-seven. By the time the boy was six years old, he had learned to play the piano, the organ, the violin and the flute, he sang in the church choir, and composed music and he was able to transpose any piece of music, no matter how difficult.

As a young boy, Pablo attended the village school, and enjoyed playing with the other children of Vendrell in all their ordinary games and activities. By the time he was eight years old, he had become quite a good violinist. The boys of Vendrell made fun of his violin playing, and he was so hurt that gave up the violin, and searched for another instrument. About this time, he saw a performance by an odd group of musicians who used all sorts of rare and strange instruments, one of which was homemade "cello" made from a gourd and some gut strings. At Pablo's request, his father made such an instrument for him, and in a very short time he was able to play anything on it, and even gave "concerts" for his family and friends. Pablo kept and treasured this toy "cello" all his life.

In 1887 Casals first heard the cello played at a concert given by the Spanish cellist Jose Garcia of the Municipal School in Barcelona and decided that was the instrument he wanted to play. He devoted himself to practicing, and his family soon realized that he should study the cello seriously. In 1888 Pablo's mother took him by train to Barcelona, and enrolled him in the Municipal School, where he studied with Jose Garcia for three years, excelling in theory and composition. There he gained experience as a performer in the various cafes of Barcelona.

Casals made his debut in Barcelona in 1891. Through beneficial family and personal connections with nobility, he was able to pursue further study in Madrid and Brussels. He returned to Barcelona in 1896 as principal cellist at the Gran Teatro del Liceo. By this time he had established his own unusual technique with more flexible left-hand positions and a freer bowing technique. In 1897 he performed for the Queen of Spain. On 11/12/1899 he made his Paris debut with the Lamoureux Orchestra, launching him on a touring career that eventually made him world famous. In 1901 he made his first visit to the U.S., touring with vocalist Emma Nevada. Midway through the tour, he suffered a serious injury to his left hand, forcing him to take several months off to recuperate. He returned to the U.S. again in 1904 and performed at the White House for President Theodore Roosevelt. Casals toured Russia as a performing cellist for the first time in 1905, during the time Russia was at war with Japan.

In 1914 (*another source said 1906) he married famous American soprano, Susan Metcalfe in New Rochelle, New York. They gave concerts together in the U.S., Europe, England, Mexico and Cuba. Casals accompanied his wife on the piano and thoroughly enjoyed being in the background - displaying his true love of music and performing. However, after 14 years of marriage, the couple found their careers were incompatible, and they separated.

In 1917 (*another source said 1904*) he formed a celebrated trio with Alfred Cortot, pianist, and Jacques Thibaud, violinist. The trio became great friends and enjoyed touring all over Europe together. Having won an international reputation as a cellist, Casals helped found in 1919 the École Normale de Musique in Paris and also established and conducted the Orquestra Pau Casals in Barcelona. Casals spent the early 1920s developing his orchestra. Their first concert was given on 10/13/1920. The 1929 Saint’s Day Festival in Vendrell, Spain was a special celebration of the dedication of a new organ to Casals’ family parish church, made possible by his contributions.

The Spanish Civil War began in 1936 while Casals was in Brussels rehearsing his orchestra. They gave their last performance there on 7/18/1936. An outspoken opponent of Fascism, he was forced to move in 1936 to Prades in Catalan France. He refused to return to Spain after the Spanish Civil War (1936-39) and announced his retirement from public performance in 1946 to protest worldwide recognition of the Franco regime in Spain; in 1950, however, he returned to recording and conducting, choosing spoken over silent protest. In 1956 he moved to Puerto Rico, from which place he continued his personal musical crusade for peace until his death.

Casals’ father died in 1908. After his father’s death, Casals bought land in San Salvador for his mother to live. The home she created there was an important home base for him. Casals died on 10/22/1973 in Rio Piedras, Puerto Rico.