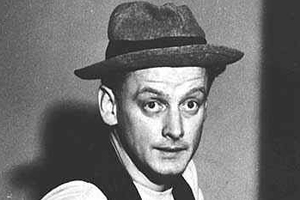 American actor and comedian on stage, screen and TV. Originally a radio comic, he built a reputation on the Broadway stage as a notable character actor. Serving in the military in WW II, he was wounded, leaving him with a limp.

Carney became established as a supporting comedian with Jackie Gleason in the long-running TV series sitcom, "The Honeymooners," with 75 shows 1952-1955. He did not enter movies until he was nearly 50, but won a Best Actor Oscar as a cantankerous old boy with a soft heart in "Harry and Tonto," 1974. Carney gathered credits for five Broadway shows and some 20 movies, and for his TV work, won six Emmys.

He married his high-school sweetheart, Jean Myers, in 1940 but they divorced, and he married Barbara Isaac in 1966. Ten years later, he and Barbara divorced and he remarried his first wife in 1980.