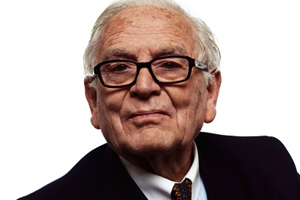 Pierre Cardin, born Pietro Cardin, is an Italian-born French fashion designer who was born on 2 July 1922, at San Biagio di Callalta near Treviso.

Cardin was known for his avant-garde style and his Space Age designs. He prefers geometric shapes and motifs, often ignoring the female form. He advanced into unisex fashions, sometimes experimental, and not always practical. He introduced the "bubble dress" in 1954.

On 16 October 2009, Pierre Cardin was nominated Goodwill Ambassador of the Food and Agriculture Organization of the United Nations (FAO).

Cardin was educated in central France. Beginning his career early, Cardin, aged 14, worked as a clothier’s apprentice, learning the basics of fashion design and construction. In 1939, he left home to work for a tailor in Vichy, where he began making suits for women. During World War II, he worked in the Red Cross, launching humanitarian interests that continue to this day.

Cardin moved to Paris in 1945. There, he studied architecture and worked with the fashion house of Paquin after World War II. He worked with Elsa Schiaparelli until he became head of Christian Dior's tailleure atelier in 1947, but was denied work at Balenciaga.

Cardin founded his own house in 1950. His career was launched when he designed about 30 of the costumes for "the party of the century", a masquerade ball at Palazzo Labia in Venice on 3 September 1951, hosted by the palazzo's owner, Carlos de Beistegui. He began with haute couture in 1953.

Cardin was the first couturier to turn to Japan as a high fashion market when he travelled there in 1959.

In 1959, he was expelled from the Chambre Syndicale for launching a ready-to-wear collection for the Printemps department store as the first couturier in Paris, but was soon reinstated.

During the 1960s, Cardin began a practise that is now commonplace by creating the system of licenses that he was to apply to fashion. A clothing collection launched around this period surprised all by displaying the designer’s logo on the garments for the first time.

Cardin resigned from the Chambre Syndicale in 1966 and began showing his collections in his own venue, the "Espace Cardin" (opened 1971) in Paris, formerly the "Théâtre des Ambassadeurs", near the Embassy of the United States in Paris. The Espace Cardin is also used to promote new artistic talents, like theater ensembles, musicians, and others. He was also contacted by Pakistan International Airlines to design uniforms for the flag carrier. The uniforms were introduced in 1966 to 1971 and became an instant hit.

In 1971, Cardin redesigned the Barong Tagalog, a national costume of the Philippines by opening the front, removing the cuffs that needed cufflinks, flaring the sleeves, and minimizing the embroidery. It was also tapered to the body, in contrast with the traditional loose-fitting design; it also had a thicker collar with sharp and pointed cuffs. A straight jacket design was favoured by President Ferdinand Marcos.

Cardin was a member of the Chambre Syndicale de la Haute Couture et du Prêt-à-Porter from 1953 to 1993.

Like many other designers today, Cardin decided in 1994 to show his collection only to a small circle of selected clients and journalists. After a break of 15 years, he showed a new collection to a group of 150 journalists at his bubble home in Cannes.

Cardin entered industrial design by developing thirteen basic design "themes" that would be applied to various products, each consistently recognizable and carrying his name and logo. He expanded into new markets that "to most Paris fashion designers, it is rank heresy."

The business initiatives included a contract with American Motors Corporation (AMC). Following the success of the Aldo Gucci designed Hornet Sportabout station wagon interiors, the automaker incorporated Cardin's theme on the AMC Javelin starting in mid-1972. This was one of the first American cars to offer a special trim package created by a famous French fashion designer. It was daring and outlandish design "with some of the wildest fabrics and patterns ever seen in any American car".

The original sales estimate by AMC was for 2,500 haute couture "pony" and muscle cars. The special interior option was continued on the 1973 model year Javelins. During the two model years, a total of 4,152 AMC Javelins received this bold mirrored, multi-colored pleated stripe pattern in tones of Chinese red, plum, white, and silver that were set against a black background. The Cardin Javelins also came with the designer's emblems on the front fenders and had a limited selection of exterior colors (Trans Am Red, Snow White, Stardust Silver, Diamond Blue, and Wild Plum) to coordinate with the special interiors. However, 12 Cardin optioned cars were special ordered in Midnight Black paint.

Continuously fascinated by geometric shapes, in 1975, Cardin applied his fetish for the bubble to a monumental domestic work which would become Le Palais Bulles (the Bubble House), along with the help of architect Antti Lovag. Cardin furnished the Bubble House with his original creations. The curves of the Bubble House extend over 1,200 square metres and contain ten bedrooms decorated by contemporary artists, as well as a panoramic living room.

Cardin bought Maxim's restaurants in 1981 and soon opened branches in New York, London, and Beijing (1983). A chain of Maxim's Hotels are now included in the assets. He has also licensed a wide range of food products under that name.

During the 1980s and until the mid-1990s, he supported a French Press organization for Music-hall, Circus, Dance and Arts presided by a well known journalist in France, Jacqueline Cartier, with authors or notable personalities as Guy des Cars, Francis Fehr, Yves Mourousi and Jean-Pierre Thiollet.

In 2001, Cardin purchased the ruins of the castle in Lacoste, Vaucluse that was once inhabited by the Marquis de Sade; he has partially renovated the site and holds music or dance festivals (particularly with Marie-Claude Pietragalla) there.

Cardin also owns a palazzo in Venice named Ca' Bragadin. Although Cardin has claimed in several interviews that this house was once owned by Giacomo Casanova, in reality it was the home of Giovanni Bragadin di San Cassian, Bishop of Verona and Patriarch of Venice.

In 2003, Cardin invited the award-winning Chechen children's dance ensemble, Lovzar, to dance in his musical show "Tristan and Isolde", performed in Moscow.