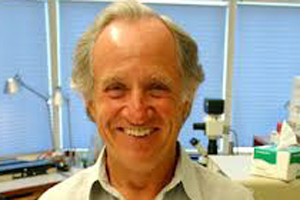 Italian-born Nobel Prize winner, distinguished American professor, researcher and recipient of many international awards for his work on gene targeting. Describing himself as a husband, father and then scientist, his work aims to target genes for the understanding, treatment and prevention of disease.

Capecchi is the child of an American mother and an Italian airman. His mother, Lucy Ramberg, was the child of an American artist who opened a school in Florence, Italy and a German archeologist. Caught up in the European political scene of the mid-to-late 1930s, Lucy became involved with the Bohemians, the artists, literati and intellectuals who protested the Fascist and Nazi political movements. In northern Italy she met Capecchi’s father, an Italian Air Force officer who would go missing in Libya. She herself was captured by the Nazis in 1941 and imprisoned in Dachau, a Nazi concentration camp, but not before she left her only child with financial provision in the care of friends. Within a year, the money had run out and Mario, age 4, was left to his own devices. He spent the next five years wandering from town to town, foraging for food and shelter with other homeless children, spending time in orphanages or on the streets. Suffering from severe malnutrition, fever and the ill effects of physical and emotional trauma, he was hospitalized in such poor condition that he was not expected to live. Having been liberated from Dachau at the war’s end, his mother spent a year looking for him. On his ninth birthday she located him in the hospital. Tormented by her own unspeakable experiences, she took him to Pennsylvania to live with her brother, Edward Ramberg, and his wife, in a commune near Philadelphia.

Capecchi spoke no English when he arrived in the United States but attended a Quaker school where social conscience and creative learning were emphasized. He became active in sports and as an adult credits his athletic participation with learning about “human psychology, things you later transfer to relationships: perseverance, pushing yourself beyond certain limits.” Being in the presence of his Uncle Edward, a politically-aware physicist, helped inculcate a respect for science and politics.

In 1961, Capecchi graduated from Antioch College with a major in both physics and chemistry. But after working at MIT, he became interested in the exciting field of molecular biology, pursuing the interest at Harvard on the advice of Dr. James Watson. Earning his doctorate in biophysics in 1967, Capecchi stayed at Harvard for the next six years, first as a junior fellow and then as a biochemistry faculty member at the Harvard School of Medicine. In 1973, he was drawn to the University of Utah, which he felt provided a more creative atmosphere and allowed for the interdisciplinary approach that he valued. By 1977 he had made significant strides in working with DNA. Although the National Institute of Health initially refused funding for his project in genetic targeting, he showed great success by 1984. In 1989 he was able to produce mice with specific genetic mutations.

Capecchi has been honored by many prestigious international awards, including the 1996 Kyoto Prize for Basic Science, the 2001 Albert Lasker Award for Basic Medical Research, the 2001 National Medal of Science, and the 2003 Wolf Prize from Israel. In 2007 he added a Nobel to his list, which he shares with two others, Sir Martin Evans and Oliver Smithies. The Nobel Prize in Physiology or Medicine recognizes their “discoveries of principles for introducing specific gene modifications in mice by the use of embryonic stem cells."

A thoughtful, soft-spoken man, Capecchi has no plans to retire. His mother who never recovered psychologically from her horrific WWII experiences, died in 1987 and his Uncle Edward, who was a significant role model, died in 1996. Capecchi lives with his wife and daughter in Utah where he continues his scientific research.