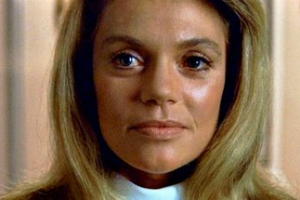 American actress in films, TV, and on Broadway stage. She was given as Oscar nomination for "Bob & Carol & Ted & Alice," 1969.

Cannon studied anthropology at the University of Washington for several years before moving to Hollywood and developing her acting career. She was a relatively minor actress before she married Cary Grant, 7/22/1965, who was 34 years her senior. Cannon gave birth to their daughter Jennifer the following year. Three years later, they divorced on August 1967. In her court case against Grant in 1968, she spoke bitterly about his use of LSD and violet outbursts. She was awarded custody of their daughter, then two years old, and moved to Malibu.

After her divorce, Cannon herself tried everything from New Age fads to designer drugs. Blonde and curvy, she has a world-weary look. In 1973, she traded in any hope of success for years of drug abuse, but she surprisingly returned to better roles. She wrote and directed a short film "Number One" in 1977. Grant was faithful in child support, but in 1977 Cannon ran through her savings and came close to losing her house. She reluctantly chose to take $100 from her daughters' money, which she had saved to buy a horse. She then resumed her career in "Revenge of the Pink Panther," but success prolonged separations from her daughter, who graduated in 1987. Her attitude toward Grant had softened by the time he died of a stroke in 1986.

Years of bitterness were swept away when Cannon married real estate broker Stan Fimberg in 1985. She filled for an amiable divorce in January 1991. Cannon has two passions in life; her daughter, and the LA Lakers. She came up with another winner of a TV series in 2001 playing the mother of "Three Sisters."