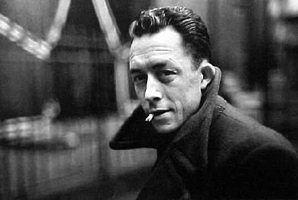 French writer (born in Algeria), an essayist, novelist and dramatist. With great technical skill, he stressed man's need to carry out responsibilities in a fight against social evils. His books include "The Stranger," 1942 and "The Fall," 1957. He was awarded the Nobel Prize for Literature in 1957.

His poverty-stricken mother raised Camus in Algiers, after his father died in World War I. He attended public schools and worked hard to be accepted into the University of Algiers. As a teenager, he enjoyed sports, such as swimming and football. He was a tall, thin man with dark hair and blue eyes.

In 1935 he managed a theatrical company, L'Equipe, and was an active part of the intellectual community. His first book "L'Envers Et l'Endroit," a collection of personal essays, was published in Algiers in 1937. The following years he published a volume of essays, "Noces", and traveled abroad for the first time. On his return to Algiers he worked as a journalist for "Alger Republicain" until 1940 when he went back to France to join the staff of "Paris-soir."

In June, when France fell to German armies, he returned to North Africa to teach at a private school in Oran. He went back to Paris in 1942 and completed his novel, "L' Étranger." In France Camus played an important role in the renaissance movement, writing for the underground press, "Combat." As the editor, he wrote a series of moving and deeply philosophical essays. Camus resigned from the paper in 1945 to devote more time to his writing. In 1946, he made a lecture tour of the United States where he published his novel, "The Stranger."

In 1947 he took an active interest in movements for World Government, becoming the founder of the Committee to Aid the Victims of Totalitarian states. During the war, he was also a member of the French Resistance. He met his wife, Simone, in France. She was glamorous but a drug addict and he married her partly out of sympathy. He divorced her when she began prostituting to get drug money. From then on it became a struggle for Camus to trust anyone.

His last manuscript was written in pencil, uncorrected, being the first part of a larger autobiographical novel. His widow decided not to publish it. Camus was serious and shy, with a unique combination of intellect and compassion.

Having poor health, he suffered from Tuberculosis, and was a chain smoker. He married again in 1940 and had a son and daughter.