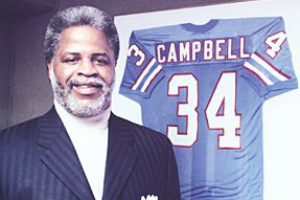 American black athlete, a football running back 1978-1985 and winner of the 1977 Heisman Trophy. Rookie of the Year with the NFL Houston Oilers from 1978, in six years he ran the ball 1,883 times, more often than any player in the NFL. Campbell had eight seasons with the Houston Oilers and New Orleans Saints and was inducted into the National Football League Hall of Fame. He was known as one the NFL's most fearless runners gaining 9,407 yards in his offensive lineman career. After his first serious injury, he had knee surgery May 1984 to remove a small piece of cartilage in his right knee. A pure power runner, he was not adept at passes or clocking.

Two years after he quit football in 1986, he began to experience episodes of panic attacks that would paralyze him. The attacks struck without warning and were so intense he thought he was dying. After three months of not getting a correct diagnosis, in 1988 he finally saw a psychiatrist who knew what was wrong - a panic disorder.

Known as a workaholic, Campbell finds that if he works for about ten days straight and doesn't get the rest he needs, he is most vulnerable to be hit with a panic attack. Now he speaks with other patients and doctors in Texas, California and New York telling about the disorder and what can be done about it. He became a businessman, owning a company that makes east Texas-style hot sausages.

Campbell married his wife, Reuna, a former nurse who now runs a boys' clothing shop, in 1980. The have two sons, Earl Christian II and Tyler Christian.